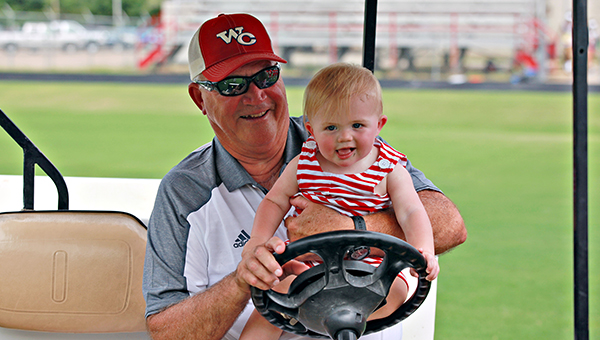 Warren Central football coach Robert Morgan holds his grandson during the team’s picture day in July 2016. Morgan, who won 168 games and two state titles as the Vikings’ head coach from 1985-2003, was one of seven people selected to this year’s class of the Vicksburg Warren School District Athletic Hall of Fame. (File/The Vicksburg Post)

A trio of state champions will headline this year’s class of the Vicksburg Warren School District Athletic Hall of Fame.

Former Warren Central football coach Robert Morgan, along with WC baseball player Taylor Tankersley and former Vicksburg High basketball great Michael Phelps — all of whom won state titles during their respective high school careers — will anchor the seven-person class that will be inducted in August.

The Class of 2017 will be inducted at a banquet Aug. 31 at 6 p.m. at City Auditorium, and honored at halftime of the Vicksburg vs. Warren Central football game on Sept. 1. Tickets for the banquet are $20, and will go on sale Aug. 3 at the VWSD athletic office on Mission 66.

“It’s a great privilege, to be honest. To be considered and selected is something I’m very proud of,” said Burns, who was a two-way starter for VHS in 1977 and ’78. “To be among some of the great athletes that have come from the district is a great honor.”

Here is a quick look at this year’s inductees:

• Burns was a linebacker and offensive lineman for the Gators, including on the 1978 team that went 10-2 and finished as the runner-up in the Big 8 Conference. Burns was also a standout in track and field, winning Big 8 titles in the shot put and discus, and made several all-state teams in football. He went on to play linebacker at Mississippi State.

• Morgan is Warren County’s all-time winningest football coach. He posted a record of 168-72 while serving as Warren Central’s head coach from 1985-2003. He is one of only three Warren County coaches to win more than 100 games. His predecessor at Warren Central, Lum Wright, Sr., won 125 games and St. Aloysius’ Joe Balzli won 115.

Morgan also was an assistant at Warren Central for nearly 20 years before becoming the head coach, and has continued to serve on its coaching staff as a part-time volunteer assistant since retiring.

Morgan was inducted into the Mississippi Association of Coaches Hall of Fame in 2004.

• Phelps led Vicksburg High’s boys’ basketball team to the 1980 MHSAA Class AA state championship, scoring 1,088 points and averaging 24.2 points per game in his senior season.
He went on to star at Alcorn State, and played three seasons in the NBA with the Seattle Super Sonics and the Los Angeles Clippers from 1986-88.

After high school, Tankersley went on to star at the University of Alabama and was the first player from Warren County ever selected in the first round of the Major League Baseball draft, when the Florida Marlins took him 27th overall in 2004. He played four seasons in the majors with the Marlins and retired from professional baseball in 2011.

Nasif went on to play defensive back and cornerback at Ole Miss, from which he graduated in 1977.

• Pettway was a versatile multi-sport athlete who lettered in softball, soccer, tennis and basketball at Warren Central. She reached the Class 5A semifinals in doubles in tennis and went on to play softball at both Okaloosa-Walton Community College in Florida and Mississippi College in Clinton.

Pettway also earned a doctorate degree in civil engineering and is a member of Warren Central’s hall of fame for her academic and athletic achievements.

• Logue, the final member of the Class of 2017, was a basketball star at Warren Central in the early 1970s. She went on to play at Delta State, and was part of a dynasty there as the Lady Statesmen won three consecutive national championships in 1975, ’76 and ’77.

Morgan is the first coach to be inducted, Tankersley the first baseball player, Pettway the first softball player, and Nasif the first who never attended either Warren Central or the current Vicksburg High School.

To be eligible, athletes must have participated in a varsity sport for at least two years at a VWSD school beginning in 1970, and must have been part of a class that graduated at least 15 years prior to nomination. Coaches must have coached for at least five years within the VWSD, and for at least 10 years in their sport.