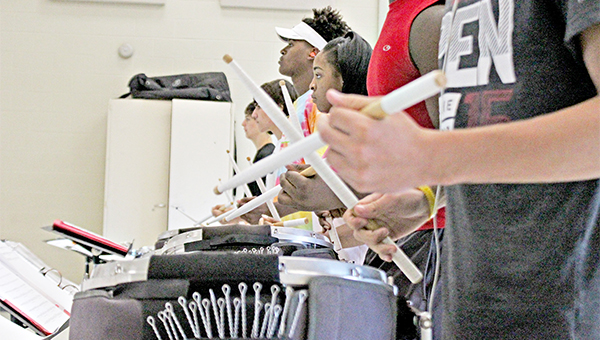 The Warren Central drumline practices during the percussion and auxiliary band camp Tuesday.

The full 165-member Big Blue Marching Band at Warren Central High School won’t take the field until next week, but this week the percussionists and color guard are working to make sure they are ready for when the full ensemble comes in.

The 27 percussionists and 31 color guard members are holding an extra week of band camp at Warren Central this week to make it easier on the brass and woodwinds to follow along when they begin learning drill next week.

“It is really important,” Warren Central band director Alan Arendale said of having them in a week early. “The percussion is basically the heartbeat of the band. If they are having trouble with their music, the band can’t move their feet.”

The drum line and pit are spending the week learning the music for Big Blue’s fall competition show called ‘Looped.’

The show breaks from the traditional structure of playing three to four familiar songs during the seven-minute show. Instead the show features one continuous song that was composed for Big Blue.

This year’s drum line features five snare drums, two tenors and five base drums on the field and 15 members playing in the pit on the sidelines.

“We are working in a new snare drummer, a new bass drummer and then three new kids in the pit,” percussion instructor Nathan Ball said. “The only kid in the entire battery with no marching experience played in the pit last year. They are all veterans.

They are all experienced and they all know how rehearsals are supposed to work. They are really dialing it in.” The 31 members of the color guard are also spending the week learning their routine for the show. No final decisions have been made, but color guard instructor Jace McMullin said they have talked about using hula-hoops and streamers along with the typical flags, sabers and rifles as part of the “Looped” show.

The color guard is working to incorporate 12 new members this year, although most of them have at least some experience at the middle school level.

Arendale said the goal is to have about 30 percent of the show installed by the first game, but finding a stopping point will be harder because they don’t have traditional song breaks.

Adams set on building on success as principal at…