Monsour outlines his goals for Vicksburg at Kiwanis Club 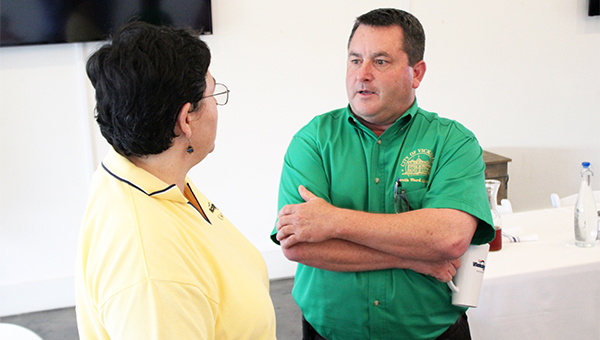 South Ward Alderman Alex Monsour talks to Donna Osburn after the meeting of the Kiwanis Club Tuesday where he was the guest speaker.

Reducing crime, job growth and tapping into the potential of tourism are three of new South Ward alderman Alex Monsour’s immediate goals for the city of Vicksburg.

Monsour discussed his plans for the city and his motivation for running for South Ward alderman following a 10-year stint in the state legislature at Tuesday’s Kiwanis Club meeting.

“I wanted to run for alderman of the city of Vicksburg to try to give Vicksburg the reason why our children come back home,” Monsour said. “I want to help Vicksburg get back to the kind of jobs they can raise a family on and have a future with their family.”

Monsour said that the leaders in the state have been asking him for the last five years why Vicksburg was struggling to take the next step. His plan as alderman is to use those same contacts to make sure that Vicksburg has a prominent seat at the table going forward.

“We are going to fix this thing faster than anyone has ever seen,” Monsour said. “We have some minds in there that are alike.

Monsour said a good education system and low crime are two of the biggest factors in the success of a city. He added that Vicksburg consistently ranks between 21 and 28 on the list of safest cities to live in in the state of Mississippi and that a ranking that low is “unacceptable.”

Monsour said he sees an issue with the fact that there are three cities within an hour’s drive that are ranked in the top nine of safest cities to live in the state and that Vicksburg actually ranks four spot below Jackson on the list of safest cites to live in.

“It is either one of two things,” Monsour said. “We are either reporting it different than some or that petty crime that is happening has a heavy impact. We are not big on the big crimes like murder and rape. It is the crimes down on the low end that are killing us.”

Monsour said he wants to see more patrolmen walking around downtown and that in the last two weeks they have already received multiple positive comments from residents about police being out and about in the community.

Monsour also hopes to capitalize on the tourism potential of Vicksburg from the military park to the river and available hunting and fishing in the area.

“We’ve got to invest in tourism,” Monsour said. “Vicksburg is number three in the state right now for tourism revenue. We need to be number one, because we can be with just a little extra effort. People love to come to Vicksburg. They have many reasons to come to Vicksburg.”

His overarching goal is making sure that Vicksburg is a place that people want to come to and live, especially with 2,500 jobs coming to the area in three years when the Continental Tire factory opens.

Part of getting ready for the plant to open, Monsour said, is continuing to make improvements at the port such as adding dry docks.

“We have been a reactive city instead of a proactive city and you have to change that mindset,” Monsour said. “You have to go big because all the others are going big. The opportunities are there. The governor, the speaker of the house and the lieutenant governor have all given me the assurance that they are ready to invest in Vicksburg.”