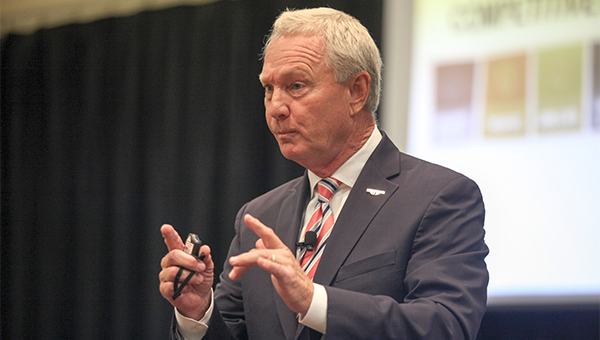 Mississippi’s economic development head cheerleader spoke to the Vicksburg Warren County Chamber of Commerce at its monthly luncheon Tuesday and shared what he thinks are many positives happening in our state.

“If you are able to work, we want to help you get a job,” McCullough said. “The best social program ever invented is a good career so you can provide for your family.”

Continental Tire is the latest success in the state’s work to lure business and industry.

“Coming here we rode past a 950- acre site right off of I-20 in Bolton, where Continental Tire plans to build a state of the art tire plant and invest $1.45 billion that will create 2,500 new careers that will pay an average annual income of $40,000,” he said. “They chose to put their investment in Hinds County because they can achieve their goals in Mississippi, better than in any of the most competitive states or other places in the world. And we believe that Warren County and Vicksburg are uniquely positioned to support the success of Continental Tire.” McCullough listed the variety of industries making an impact economically in Mississippi, including:

• Aerospace companies like Rolls Royce, Lockheed Martin and Raytheon. “Every manned space vehicle comes through Hancock County, where its engines are tested at Stennis Space Center,” he said.

• “Every commercial airliner has had at least one component manufactured in Mississippi.”

• Airbus helicopters are assembled “in the Golden Triangle in Mississippi,” McCullough said.

• 350,000 Nissan and Toyota vehicles are assembled each year in Canton. At the Toyota plant in Blue Spring, a Corolla rolls off the assembly line every 71 seconds.

• 70 percent of the U.S. Navy’s fleet was built in Pascagoula, McCullough said.

• Mississippi is number one in the nation in telehealth.

One of the state’s leading industries is tourism. McCullough said 23 million tourists visited Mississippi last year, and many of those came through Vicksburg and Warren County. McCullough praised the Vicksburg National Military Park, saying it is the second largest national cemetery in the country next to Arlington. He said those visitors left $6.3 billion in the state’s economy and employs more than 86,000 Mississippians.

Finally, McCullough praised Pablo Diaz, who was hired several months ago to lead the economic development efforts in Vicksburg and Warren County.

“He’s one of the best in the country. You’re in good hands,” he said.