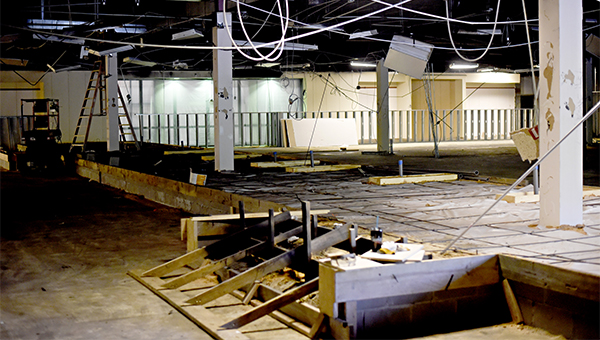 Construction on the new bowling alley in Vicksburg is ongoing, but operations manager Patrick Belden said they are only “about 25 percent” completed with the project.

“Most of the walls are up,” Belden said. “We are waiting on plumbing and electrical.”

The bowling alley is being built in the old Goody’s clothing store at the Vicksburg Mall and will feature 16 lanes. There will also be a restaurant and gaming area, but Belden said they have not decided on what the restaurant will be except that there will be a bar included.

When the bowling alley, which Belden said will be named Fun Lanes, opens, it will be the first in Vicksburg since Red Carpet lanes closed in 2003.

Following the news of the bowling alley being built, the Vicksburg Warren School District in May made the decision to add bowling as a sport in the district for the 2017-18 school year.

“A lot of people don’t know that that is a sanctioned activity,” VWSD athletic director Preston Nailor said in May. “We’re 45 minutes away from a number of schools that offer it, so we have some teams close by that we can play. Not only are we adding new sports, but we’re bringing in kids that might not otherwise play sports.”

Bowling is a winter sport through the Mississippi High School Athletics Association. The season starts in mid-October with practices and matches begin in November.

No consensus on plan for open containers