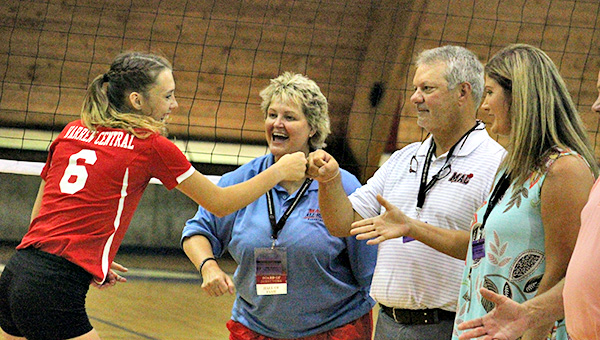 Warren Central volleyball player Sydney Stuart (6) gets a fist bump from Johnny Mims, the executive director of the Mississippi Association of Coaches and a Vicksburg native, during introductions for the MAC All-Star Game Wednesday in Jackson. (Ernest Bowker/The Vicksburg Post)

JACKSON —Warren Central’s volleyball team will hit the court Thursday evening for a preseason scrimmage with Vicksburg High. On Wednesday, most of them were in the stands to cheer on one of their own who was in the spotlight.

Senior Sydney Stuart suited up and started for the North team in the Mississippi Association of Coaches All-Star Game Wednesday at Millsaps College. She was the first player from Warren Central ever to be selected for the game and said she enjoyed the experience of being among the best of the best in Mississippi.

After the game, her all-star teammates gave her the “Team Player Award,” a sportsmanship award that goes to their favorite teammate.

“The girls are amazing and they are so easy to bond with. I feel like I’m playing with my home team. It’s awesome,” Stuart said. “I’m glad to get the privilege and be on the team with these girls. It’s really an honor to play up here and be watched and coached by Coach (Melissa) Denson and Coach Meaghan (Schlueter).”

As she heads into her senior season, Stuart and the Lady Vikes both have a laundry list of goals to accomplish. Stuart is being recruited by a handful of colleges. Besides getting some exposure to the college scouts in attendance Wednesday, she said playing in the all-star game just before the season starts gave her extra incentive to work hard and improve her game in the offseason.

“It gets me season-ready with my girls and best friends on my home team. I’m so ready to spend my last year with them playing volleyball,” Stuart said. “It gets my momentum pumping and ready for the season.”

The real run-up to the 2017 season begins Thursday, when the Lady Vikes host Vicksburg in a scrimmage at 5:30 p.m. A jamboree match is after that, on Aug. 4 at home against Madison-Ridgeland Academy, and the season opener is Aug. 8 at home against Germantown.

Warren Central finished 12-11 last season — the first winning record in the program’s seven-year history — but lost in the first round of the MHSAA Class III playoffs for the second year in a row.

This year’s roster has 10 upperclassmen, and Stuart said they share a bond that should translate to on-court success.

“I think we’re going to be really good, because we’re all friends. We all get along. There’s no drama, no nothing, and we all work together so good. So I think it’s going to be a good and fun year, and a competitive year, too,” Stuart said. “We’re all very competitive. We all play different sports, so we’re all athletic. It’s just going to be amazing. It’s going to be a great way to end my senior year.”

Vicksburg golfers fall behind at Junior Am