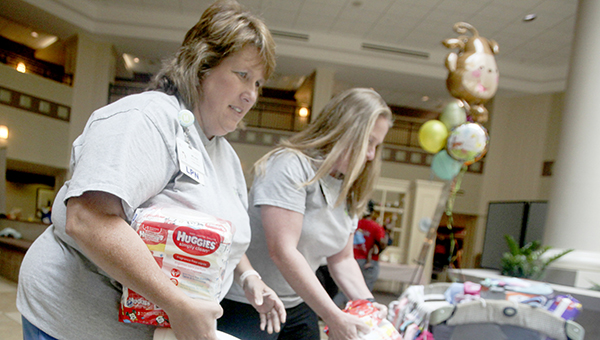 Parents of young children and those expecting their first had the chance to take advantage of a wealth of resources during the first annual Parent Resource Fair Sponsored by Merit Health River Region Hospital and the United Way of West Central Mississippi Friday.

The fair was held at the hospital alongside a community-wide baby shower that accepted donated baby supplies for the United Way’s partner agencies.

“Today [parents] are going to find out about all the resources that are available that they may not have realized,” Greg Honeycutt, the director of diagnostic imaging at River Region and organizer of the fair, said. “We have our pediatrician and OBGYN table, we have breastfeeding, nutrition, reading for toddlers, speech school, we have mental health resources for postpartum depression, we have fatherhood booths, a wide variety of resources and training.”

Ashley Selmon, who is expecting her first child Sept. 12, took advantage of the fair to learn new information to prepare for motherhood.

Richard Preis, who attended the fair along with his fiancé and 6-month-old son, said he learned how to properly measure the amount of formula his son was getting and received a chart to go by. He also learned the importance of burping the baby after feeding and to not lay the baby down flat after feeding him.

The fair wasn’t only beneficial to new parents. Wanda Houston attended the fair as a grandmother looking for information to help her daughter- in-law with her newborn.

“My granddaughter was born Tuesday and she had to be airlifted to UMMC,” Houston said.

“She only weighed 2.9 pounds, but my daughter-in-law is still upstairs so I brought her 4-year-old to visit with her. We saw all the tables set up and it is a good thing they are doing to help out.”

She wasn’t looking for feeding tips or information on nutrition, but she did have her sights set on one very important piece of information for her daughter-in-law.

“How to deal with siblings,” Houston said of the most valuable information she learned. “Her 4-year-old is not having it right now. He doesn’t want a brother and he doesn’t want a sister, but I think that will change once he gets a chance to see her.”

Michele Connelly, executive director of the United Way of West Central Mississippi, said their goal was to have something on hand that could help every parent that came through.