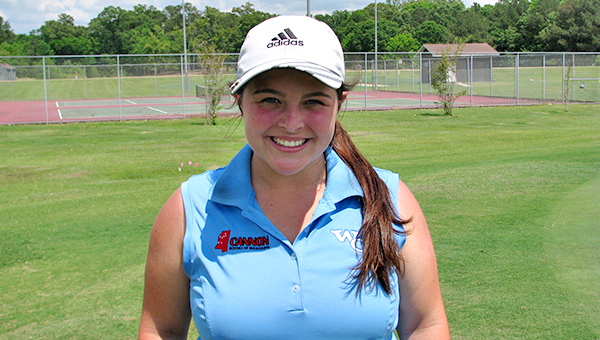 Karley Whittington fell short in her quest to win the Mississippi Junior Amateur Golf Championship this week, but did manage to snag a nice consolation prize.

The Warren Central senior was selected as one of three golfers from Mississippi to play in the USGA Women’s State Team event in September. The tournament pits three-woman teams from all 50 states against each other in a three-round tournament Sept. 26-28 in Santa Fe, New Mexico.

“This year, they decided to take juniors from Mississippi and picked three that they thought could compete under national pressure,” Whittington said. “I’m really excited. I think it’ll be good for my game to compete nationally.”

The news was a bright spot at the end of a tough week on the course for Whittington. She finished third at the Mississippi Junior Amateur at Old Waverly Golf Club in West Point, but was 21-over par for the tournament and 29 shots behind winner Presley Baggett.

Baggett shot a 71 in Thursday’s final round, her third in a row under par, and was the only golfer in the girls’ division to shoot any round under par in the three-day tournament. She finished at 8-under par 208.

Baggett quickly turned the tournament into a runaway by opening up an 11-shot lead at the end of the first round. That made the final result a little easier to take, Whittington said.

“I was fine with it. I was rooting for her, to be honest. I wanted her to shoot three rounds under par because you don’t see that a lot,” Whittington said.

Whittington shot rounds of 79, 77 and 81. She only made two birdies in 54 holes, and had 17 bogeys and three double bogeys. She trailed Stockett by two shots in the race for second place entering the final round, but struggled mightily on Thursday. Whittington made four bogeys on the front nine, another on the 11th hole, and double bogeys on Nos. 10 and 12.

Stockett only made one birdie on Thursday, and dropped three strokes by going bogey-double bogey on Nos. 3 and 4, but steadied things after that with pars on 12 of the last 14 holes. By the time Whittington double bogeyed the 12th hole, Stockett had stretched her lead to eight shots.

“I just couldn’t putt. I couldn’t get the speed of the greens, and then the little misses were in places where it was hard to get up and down from,” Whittington said. “It’s very frustrating. But it’s golf.”

Whittington was the only golfer from Vicksburg competing in the girls’ tournament, but several on the boys’ side were buried under the same sort of avalanche.

Hunter Logan eased his way to a final-round 71 to put a bow on an eight-shot victory in the boys’ tournament. Logan finished at 10-under par 206 for the tournament. Cohen Trolio, Cameron Clarke and C.J. Easley tied for second at 2-under par 214.

Vicksburg’s top finisher was recent St. Aloysius graduate Channing Curtis. He shot a 79 on Thursday and finished in a three-way tie for 14th place at 13-over par 229.

Curtis got off to a good start Thursday with a birdie and three pars on the first four holes, but double bogeyed the fifth. He made two more bogeys before the turn, and finished with four bogeys and a double bogey over his last six holes.

Curtis’ former St. Al teammate, Wilson Palmertree, finished alone in 45th place at 34-over par 250. He shot an 84 on Thursday and did not have a birdie for the first time in three rounds.

West Point’s Wells Williams won the 12-13-year-olds’ title by shooting a 73 on Thursday to edge Collins Trolio by one shot. Williams overcame a two-shot deficit in the final round to win.

Freeze out as Ole Miss coach