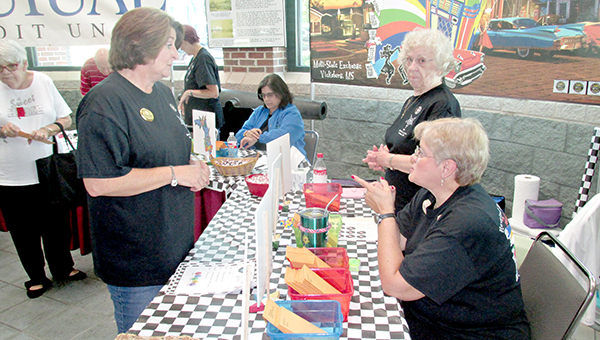 ORDER OF THE EASTERN STAR: Pamela Johnson of Vicksburg, seated, talks with JoAnn Harris and Jeannie Childers during registration Friday at the Order of the Eastern Star Multi-State Get Together at the Vicksburg Convention Center. About 400 members from seven states attended the weekend event.

About 400 members of the Order of the Eastern Star from seven states met at the Vicksburg Convention Center Friday and Saturday for the organization’s multi-state get together.

“We meet with each other each year,” said Beth Anderson, worthy grand matron for Grand Chapter of Mississippi. “We alternate states each year, and this year was Mississippi’s turn to host, and we chose to come to Vicksburg. We hosted the get together in 2011 in Vicksburg and we decided to return to the city of Vicksburg.

She said members from Mississippi, Louisiana, Alabama, Arkansas, Georgia, Missouri and Florida were attending this year’s event, which has the theme, “Rewind Time Back to the Fifties.”

The event featured a series of lunches and banquets Friday and Saturday, with a sock hop featuring music by the North Mississippi group “Boomers” following the Saturday night dinner.

The convention center’s exhibit hall was decorated in a 1950s theme, with car and truck from the period, and other ‘50s memorabilia.

Anderson said the Order of the Eastern Star is the largest fraternal organization in the world with chapters worldwide, and membership is open to men and women who are Masons or are related to a Mason.

“We meet to trade ideas and have good fellowship.”

According to the Order of the Eastern Star website, the organization was founded in 1850 by Dr. Rob Morris, a Mason and architect and master builder of the order, who believed Masonry should be for the whole family, and looked for some way “women could share with the Masonic Brother the same inspiration that ‘prompts man to noble deeds.’”

Anderson said the Mississippi Grand Chapter oversees the “Little Red Schoolhouse,” the home of Eureka Masonic College, where Morris was principal when he conceived the idea of the Order of the Eastern Star.

In the United States alone, Masonic organizations give $1.5 million daily to charity, according to the OES website.