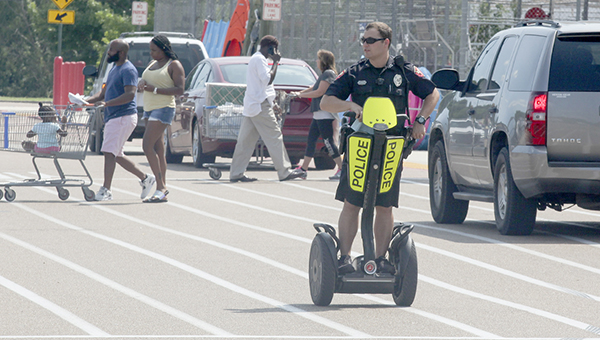 Shoppers and merchants at Walmart, the Vicksburg Mall and the Outlets at Vicksburg have been seeing something new patrolling the sidewalks and parking lots.

Police Chief Milton Moore has pulled one of the Vicksburg Police Department’s Segways out of storage and put it back in service to patrol the city’s two malls and Walmart.

Bought in 2009 for $12,780, the Segways are a two-wheel personal mobility machine allow people to move around quicker than walking. They were used previously to patrol the downtown area and were also used by police during Riverfest.

The patrols, Moore said, are aimed at increasing police presence in those areas.

He said one officer will be riding the Segway on patrol on a rotation basis, moving from one area to another.

“Officer Joseph Stubbs will be moving about the city, keeping up with my agenda of being more visible,” Moore said. “He’ll be patrolling downtown, at the outlet mall, Vicksburg Mall and Walmart.”

He said Stubbs has already received positive comments about his presence at the different sites. “They people have said they like seeing him there,” Moore said.

Scott enjoying the second of his ‘fulfilling careers’