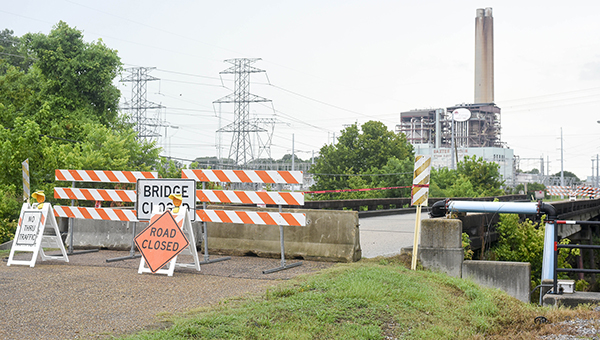 The bridge leading to Baxter Wilson Power Plant on Kemp Bottom Road is closed due to erosion underneath the bridge from the Hennessey’s Bayou. (Courtland Wells | The Vicksburg Post)

The Kemp Bottom Road bridge is in a state of collapse and closed to traffic, Vicksburg public works director Garnet Van Norman said.

“It’s just a matter of time before it collapses,” he said. “It could happen at any time.”

Kemp Bottom Road is the main route to Entergy’s Baxter Wilson power plant. The bridge crosses Hennessy’s Bayou, and has been threated by a slide on the bayou’s west bank. Van Norman said plant officials, who have been watching the bridge, called him Monday and said the bridge moved over weekend.

“We got the engineers down to look at it and they said, ‘It’s moved and its dangerous, and you’ve got to close it,’” he said. “They looked at it again today (Tuesday), and it’s moved a lot more.”

He said plant officials have blocked the bridge on the west side.

“We’re in the process now of getting the proper bridge-closing barricades that state aid requires,” he said.

Van Norman said the slide is pushing against the bridge pilings and the cap, a concrete beam placed on top of the pilings that the bridge sections sit on.

“The slide is pushing against those, causing them to bend and break and fall,” he said.

So far, the bridge problem is not affecting plant operations.

“We’re operating normally, it’s just that our access to the building has changed,” Entergy customer service representative Shelia McKinnis said. “We have a temporary access. Entergy’s controlling access to the plant for employees and authorized visitors, and we are building a permanent access road to the plant that is expected to be completed by August.”

Engineers said the problem was caused by the 2011 spring Mississippi River flood, when water filled the bayou’s banks and then quickly dropped, creating an erosion problem weakening the bank.

The Board of Mayor and Aldermen in July 2016 declared an emergency to fix a slide on the west bank of Hennessy’s Bayou and hired Stantec Engineers to develop a solution.

The repairs, however, were delayed until the board is able to find money to pay for the estimated $1.2 million repair.

Hills returns to her alma mater as the new…