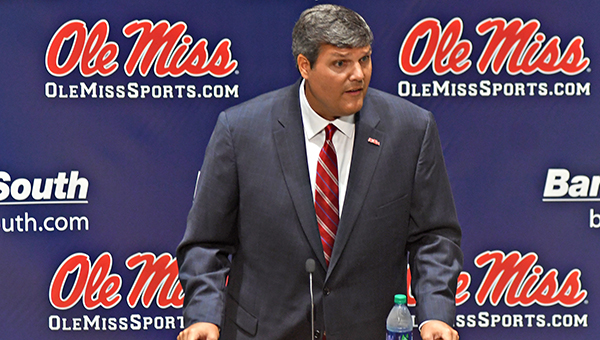 Then there were the years his family drove five hours each way between Gulfport and Oxford to watch his older brother Tom play for the Rebels. A short time later, it was Matt’s turn, and he was a mainstay on the Ole Miss offensive line from 1995-98.

“I can truly tell you all today that this is my dream job,” Luke said, occasionally getting emotional as he talked. “It’s a job I’ve been preparing my whole life for. I feel more strongly than ever that I’m the right man to run this program.”

It might be Luke’s dream job. He has not, however, inherited a dream situation.

The past 12 months have essentially been a nightmare for the Ole Miss football program.

There was a disappointing 5-7 season in 2016 and a self-imposed bowl ban for the upcoming season because of an ongoing NCAA investigation. And then — most stunningly — coach Hugh Freeze resigned in disgrace last week after a school investigation into his phone records found a “pattern of personal misconduct” starting with a one-minute call to an escort service.

Now Luke is left to pick up the pieces. It’s a daunting task — preseason camp is just over a week away and the first game is Sept. 2 against South Alabama.

Ole Miss athletic director Ross Bjork said Luke will be paid $500,000 over the next five months to be head coach. That’s in addition to his yearly $660,000 salary as the co-offensive coordinator.

While Luke could keep the job in 2018 and beyond, Bjork offered no promises other than to say Luke is “going to be a great candidate for our job. We’re going to watch him up close and personal. He and I will interact on a daily basis.”

Luke was a safe choice to lead Ole Miss in the short term for many reasons.

Even though he was with Freeze in all five of his seasons, he almost has completely avoided involvement in the school’s long-running NCAA investigation. Luke is mentioned in just one of the NCAA’s 21 allegations, but he is not the focus of the allegation.

Patterson’s development might be the most important to the Rebels’ success this season. The 6-foot-1, 200-pounder started three games last season, throwing for 880 yards, six touchdowns and three interceptions after senior Chad Kelly was lost for the season because of a knee injury.

Patterson — who was the nation’s top-rated quarterback recruit in the 2016 class — was one of Freeze’s prized recruits during his five-year tenure.

Patterson said he was “praying for coach Freeze” and that his focus was on his teammates and the coming season, even if circumstances aren’t ideal.

“We’re all just ready to play,” he said.