More problems pop up as repairs to splash pad are made 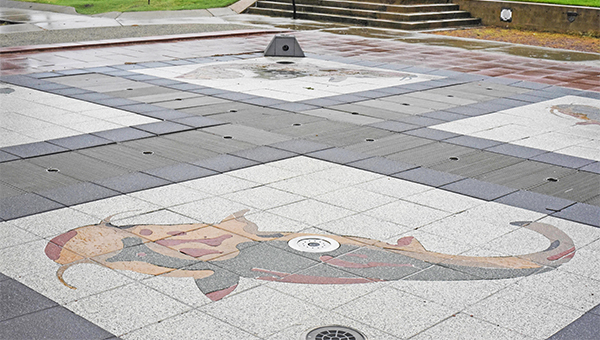 OUT OF ORDER: The splash pad in downtown Vicksburg remains closed as the city works to finish repairs to the motor that forced it to be closed June 30.

As of Tuesday morning, the only water that could be found at the Catfish Row splash pad in downtown Vicksburg was from the rain as the city continues to make repairs to the motor that forced the splash pad to be closed June 30.

The splash pad went down for maintenance when the filter motor locked up. Related problems and issues finding compatible parts for the 15-year-old splash pad caused constant delays during the repair process.

South Ward Alderman Alex Monsour, who oversees the park and recreation department, said parts needed to make the repairs were on hand and ready to be installed after the weather cleared Tuesday.

“The basic problem has been, the maintenance on it hasn’t been taken care of and it just ate [the motor] up,” Monsour said. “The chlorine gas in there over a period of time just ate everything up. I’ve had to replace everything in there.”

Once a new filter motor was purchased, the city was forced to find an impeller that would work with it. A search for the part found only one in the country, Monsour said, and it had to be shipped to Vicksburg from Wisconsin.

“The problem was they sent the motor to us, but the impeller that is inside that motor was not included,” he said. “I did not know that at the time they ordered that motor.”

Monsour said they looked into replacing the splash pad, but that once the repairs are made it should work for years to come. The computer system that operates the splash pad was replaced last year, and once the new motor is installed, Monsour said all the pieces that make it operate will be brand new.

“Once we get all these parts back and get it up and operational I think we are good for a good while,” Monsour said. “Basically, what is going to be down there in that room is new equipment everywhere from the computer all the way up to the motor itself.”

Monsour said his hope is that they will be able to get at least another 15 years out of the current splash pad, the same amount of time the original parts functioned for. Part of the plan to extend the life of the pad is to hire a contractor to routinely service it. No provider has been chosen for the service contract, but Monsour said he plans to hire someone local and that no bid process will be necessary.

“I think it will be tremendous because you have people that are used to working with chlorine and the effects of it,” Monsour said of having a service contract for the splash pad. “Just maintaining it even in the offseason helps out because it is sitting with the chlorine gas in there is just eating up everything.”

The splash pad is one of the main attractions for children in downtown Vicksburg along with Catfish Row playground, and the nearly month long delay in getting it fixed has taken away a major attraction.

Monsour said  he hopes to have water flowing from the splash pad by Wednesday “one way or another,” even if they have to bypass the computer.