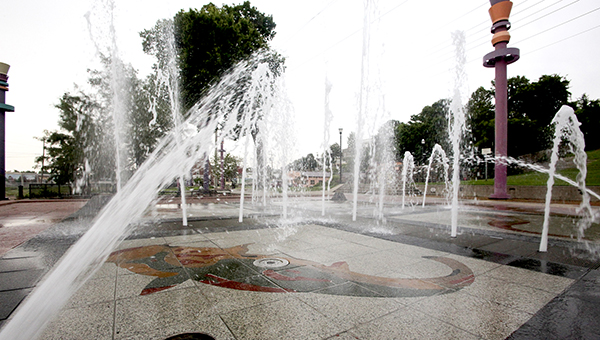 Repairs to the city’s splash pad, located at Catfish Row Art Park, were completed Tuesday afternoon, returning water to the popular attraction. The splash pad had been down for repairs since June 30. (Courtland Wells | The Vicksburg Post)

Water has returned to the splash pad in downtown Vicksburg.

The splash pad, which has been closed for maintenance since June 30, was turned back on Tuesday afternoon after a new motor was installed.

“It feels very good to get it done because it was getting a lot of attention,” South Ward Alderman Alex Monsour, who oversees parks and recreation, said. “Everybody wanted it on. We wanted it on worse than anybody you can imagine. We just had to go through the process of getting it done. I am glad it is up and running for these people and the kids and everybody else.

The splash pad was originally closed after the filter motor locked up. After a new motor was ordered, the city experienced problems finding an impeller that would work with the new motor. Monsour said they eventually located one in the entire country and had it shipped to Vicksburg from Wisconsin.

Vicksburg mayor George Flaggs Jr. said he gave city workers a deadline of 5 p.m. Tuesday to have repairs finished and water flowing, or he was going to bring in outside help.

“[Flaggs] did call,” Monsour said. “He gave me a deadline. As you can see we made the deadline. It is nothing like putting a deadline on something.”

The splash pad is 15 years old, which led to issues finding compatible parts. Flaggs said the down time was “unnecessary,” and attributed the problem to poor maintenance over the years.

Flaggs and Monsour both said the plan going forward is to hire an outside contractor to handle service from now on to make sure the splash pad remains in working order.

“It is an old unit that hadn’t had good upkeep,” Flaggs said. “Because of that, I think it is imperative that we contract with somebody else to let them do this. The splash pad it too important to tourism and to the young kids of our community to let this ever happen again.”

Flaggs called the process “frustrating” and said he decided to give city workers the Tuesday evening deadline following consistent criticism from the community.

“I couldn’t get in Kroger Sunday morning without being criticized,” Flaggs said. “That is what made me make the decision.”

Monsour said the poor maintenance on the splash pad is part of an ongoing problem in Vicksburg that he plans to fix as the city looks to move forward.

Two main parts had to be ordered during the repair process. Monsour said one cost $1,800 and the other cost around $3,400. The computer system that controls the fountain was replaced last year.

One of the corner spigots, which was broken before the issues with the motor arose, remains out of order. City recreation director Joe Graves has previously said the spigot does not work due to a broken pipe under the concrete that covers the pad.

Monsour said they will look at repairing the broken spigot, but will not do so during the summer when the pad is most heavily used by residents and tourists.

“If it is just one jet not working on it and the rest of it is, we can live with that,” Monsour said. “If it is something we have to dig down into we’re not going to do that until after the summer and then we will make sure we take care of it.”

The splash pad is located in the Catfish Row art park off Levee Street in downtown Vicksburg.