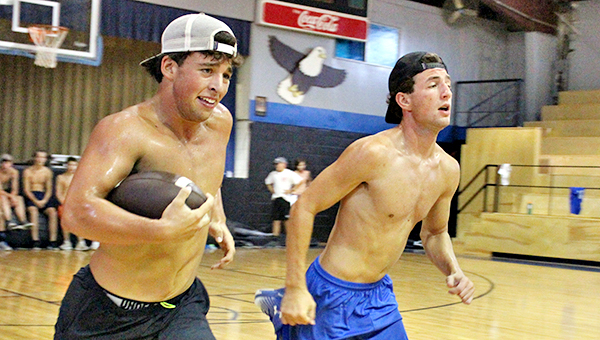 One of the most promising signs for Porter’s Chapel Academy’s football program might have come Tuesday, when rain chased the team inside from the practice field.

While the linemen lifted weights in the fieldhouse, the skill position players ran conditioning drills in the gym. Although that’s a common occurrence for many teams, it was the first time in several years that PCA has had enough people on the roster to split into two groups without either being more than a skeleton crew.

The Eagles had 35 varsity players in uniform when they began preseason practice on Monday, about a dozen more than last season.

The added depth is a welcome revelation for the Eagles. They struggled to a 1-9 record last season as injuries ravaged the roster. Besides having a number of starters missing from the lineup, other players were forced to play out of position to cover for their absence.

Now, with so many bodies available, there will actually be competition for playing time and enough depth to allow some players to play only offense or defense instead of both.

“We were three-deep, and in some cases four-deep in our drills (Monday),” Purvis said. “We will definitely trim that down and will rep a two-deep on both sides by the time the season starts.”

Both PCA and St. Al will play in a jamboree the following week at Louisiana-Monroe, and the season opener is Aug. 18. Porter’s Chapel begins on the road at Columbus Christian, while St. Al is home against Leake Academy.

The two Vicksburg schools will play each other for the first time ever in the regular season on Sept. 15 at PCA.
In the meantime, the focus this week is on conditioning and installing the basics. Purvis said the Eagles would focus on their offense for the first few days of practice. He also said he was happy with his initial impression of this year’s squad.

“I was very pleased. I thought we had a great workout (Monday),” Purvis said. “I thought we got a lot accomplished in our group session, and with getting the base pieces of the offense installed. I definitely think we got better (Monday) morning.”

Bulldogs get an early jump on season