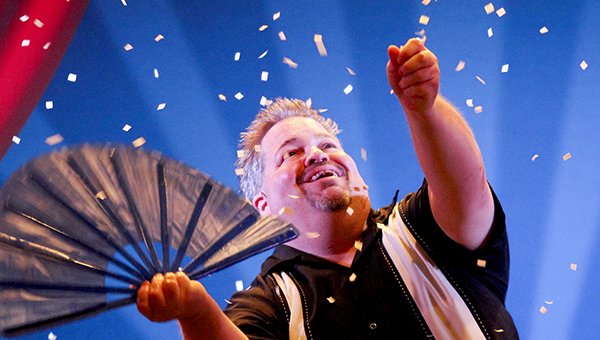 A little magic, a little comedy and tons of laughs for those of all ages were all part of the show Tuesday when Jackson based entertainer Dorian LaChance performed two shows at the Vicksburg Convention Center Tuesday.

The first show during the day was for children from area daycares and then in the evening LaChance returned to put on a show for families. The shows were planned as part of the VCC’s 20th anniversary as they look to provide more activities for the community that has supported them for two decades.

“It is amazing because of the look on their faces,” VCC executive director Annette Kirklin said. “The awe they have on their faces makes it worthwhile. It does my heart good to see all these kids come into the building and smile and be excited. It makes our job fun.”

The show featured a talking white board, disappearing handkerchief, a wily puppet named Rocky the Raccoon and plenty of audience participation.

“A lot of the children in here are very young, but we brought our after-schoolers, and I think they get the jokes a little more than some of the younger ones,” Donna Carver, the assistant director of Cutler’s Grow n’ Learn Daycare who brought children to the event, said. “They sit and they enjoy it thoroughly. The easiest we ever watch them.”

Carver said this was actually the second time students from Cutler’s have seen LaChance perform this summer, but they enjoyed the experience as much as the first.

“It is kind of like when they watch their favorite movie,” LaChance said of children enjoying his show multiple times. “It makes you feel good because they want to see it again.”

LaChance spent his summer touring around the state doing shows at libraries to promote reading. Once the school year begins, he will begin traveling around the state performing at schools. Although Tuesday’s show was more about laughs than education, he still made sure to intersperse teachable moments throughout.

“When I do a show like [Tuesday’s], it isn’t part of the show necessarily, but the core of my business is schools and libraries,” LaChance said. “I go to schools and do shows that encourage kids to read and reach their dreams and goals. I have shows that are educational in nature and they all encourage reading on some level.”

This was the first time the VCC has hosted an event of this nature, but Kirklin said after seeing the looks on the children’s faces, it certainly won’t be the last.

“I think the kids really, really enjoyed it,” she said. “I think every summer we need to look to do more stuff like this.”