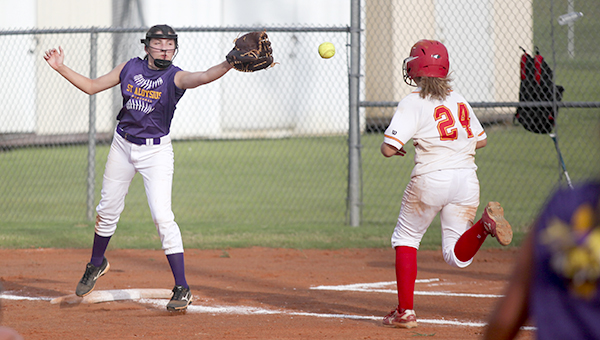 An early deficit proved to be too much for the St. Aloysius High School softball team as they fell 21-10 to Benton Academy in their season opener.

The Lady Raiders scored 11 runs in the top of the first inning as all but three of their batters came to the plate twice in the inning. After a single by Benton first baseman Halee Jenkins drove in the 11th run, the Lady Flashes moved Brooklyn Richards from catcher to pitcher. She responded by forcing two straight outs including a strike out to end the inning.

Richards pitched the remainder of the game and also went 2-for-3 at the plate with a run scored and an RBI.

“She is our senior player,” assistant coach Casey Gordon said. “She is a great leader. She plays from the heart, she leads this team and that is what we needed. She did exactly what she is supposed to do.”

The Lady Flashes cut into the deficit with five runs of their own in the bottom half of the first as they batted through the entire lineup. Benton was held to only one run in the top of the second as Richards battled back from walking the first three batters of the inning.

With the bases loaded, she worked around an RBI single to force three outs to keep her team in the game.

In the top of the fourth, Richards allowed a leadoff single and then forced three straight outs including two strikeouts to keep the Lady Raiders off the board.

St. Al scored four runs between the second and third innings to cut the Benton lead to 12-8 heading into the fourth.

“Defense looked a little rough. We have some things to work on,” Gordon said. “We just had a few bumps and for all of us to come out here for the first time and actually play a game, I think they all stood out. I think our hitting was fantastic. The attitudes were great.”

Benton found their bats again in the fourth inning scoring three runs and they added six more in the fifth to force the mercy rule and win the game 21-10.

“Last inning, everybody was tired,” Gordon said. “The heat is crucial.”

Gordon said Friday’s game marked the first time all year that the Lady Flashes had their entire team on the field at the same time.

“We have not had a full practice with all of our girls here yet all summer,” Gordon said. “I think [the bottom of the first] gave them some confidence and let them know they were still in it and to play ball. Just because we are down, doesn’t mean the game is over.”

The Lady Flashes return to the field Tuesday, Aug. 1.