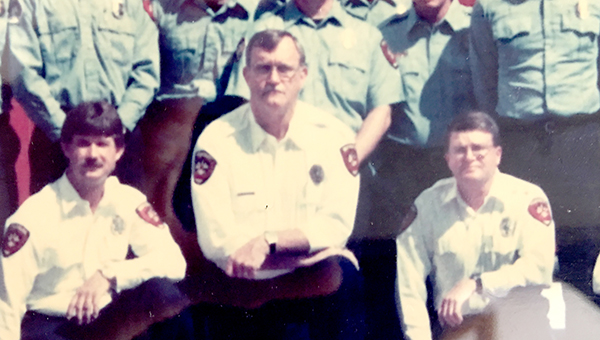 Assistant Chief John Wilkinson, center, is pictured in this 1997 photograph with some of the other members of the Vicksburg Fire Department’s C-Shift.

Vicksburg Fire Department Chief Craig Danczyk remembers John Wilkinson as a larger-than-life individual, a leader in the fire department that was as known for his valor and work fighting fires, as he was for fighting for the rights of members of the fire service.

“He was the type of the guy that if there were flames showing at the house, would go up to the front door, kick it off the frame and say ‘let’s go,’” Danczyk said. “He was just that guy. He was a man. He was ‘Big John.’”

For 32 years, Wilkinson served with the Vicksburg Fire Department, rising to the rank of assistant captain before retiring in 2001.

“He was the captain of C-shift,” Danczyk said, adding that he was assigned to C-shift when he first joined the department. “He was the closest thing to John Wayne I ever saw. He was tall, a strong man, he wasn’t afraid of fire, a leader and he was … ‘Big John.’”

In addition to his leadership,, Wilkinson made a difference for firefighters throughout the state through his lobbying efforts in Jackson.

“We worked together on legislation dealing with the fire service and improvements for firefighters,” Vicksburg Mayor George Flaggs Jr. said. Flaggs was a member of the Mississippi House of Representatives from 1988 until 2013. “He made a significant impact on bringing legislative forward that made it better for fireman.

“He had the first-hand knowledge of what we needed to improve the standards and operations of firefighters.”

Wilkinson died Tuesday at the age of 74, leaving behind his wife of 50 years, Mary, three children, six grandchildren, one great-grandchild, a brother and a host of nieces and nephews.

A memorial service will be held Monday at 11 a.m. at Riles Funeral Home with Bro. John Evans, pastor of Bovina United Methodist Church officiating. Visitation will begin at 10 a.m.

“Weather permitting, we plan to have a ladder truck at the visitation, displaying a large, American flag in honor of his service,” Danczyk said. “Much of the department will be in attendance, as well as some of the retirees.”

“He inspired a lot of people, including myself,” Danczyk said.

“The Vicksburg Fire Department is a better fire department today because he served as a fireman,” Flagg said.