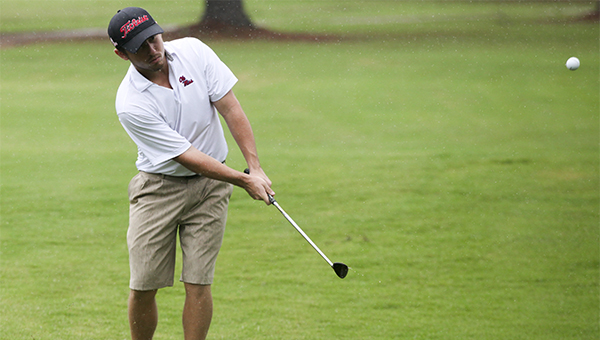 Jeff Harpole is one good round away from putting one of Warren County’s crown jewel golf trophies on his mantle. Right there with him is Channing Curtis, who is looking to do the same and nail down the tournament title that has eluded him for several years.

Harpole, Curtis and Mekus will begin the final round Sunday at 10:50 a.m., while Rutherford will tee off at 10:40. That quartet will have some cushion against the rest of the championship flight.

Cameron Curtis and Judd Mims were tied for fifth place at 74. Austin Neihaus was another two shots back at 76, Todd Boolos was next up at 77 and Justin Stokes rounded out the championship flight at 79.
All will have plenty of work to do to climb up the leaderboard against several of the county’s best golfers of this decade.

Rutherford won the County Championship in 2015 and Mekus got his title last year, both after a number of near-misses. Channing Curtis is hoping to follow that path in 2017 after tying for second place last year and finishing third in 2015.

The cut for the championship flight fell at Stokes’ 79. Mark White was just on the other side of it, and atop the first flight, with an 80. Kevin Neihaus and Hunter Simrall were another shot back at 81.

Keith Ehrhardt and Robert Portwood led the second flight after shooting matching 85s. Sean Johnson and Bob Burr were tied atop the third flight with 90s.

A total of 37 golfers are competing in the Warren County Championship, and another 10 are teeing it up in the senior division.

In the Senior Championship, Rodney McHann shot a 75 to take a two-shot lead into the final round over Hugh Hasty. John Ferguson was another two shots back at 79, while Jeff Cowan and Joe Grayson were tied for fourth at 83.

The senior division will tee off at 8:30 a.m. Sunday, with the leaders starting at 8:50. The rest of the golfers in the tournament will begin at 9 a.m.

Clear Creek Golf Course will be closed to the public until all of the tournament participants have started their rounds, and will reopen at approximately 11:30 a.m.

Pickering did not give up on his best friend