Pickering did not give up on his best friend 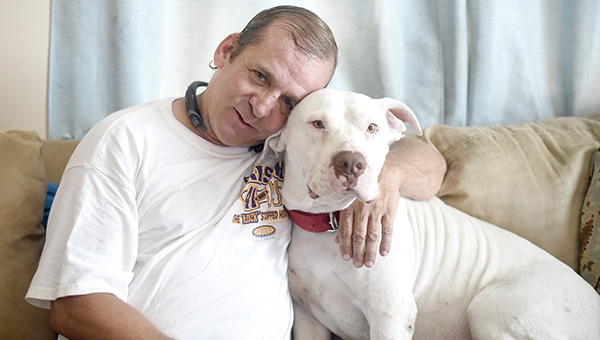 Keith Pickering sits with his dog JoJo Wednesday afternoon. JoJo was recently stolen from Pickering, who through the help of outreach on social media, found him last Friday. JoJo, when found, had suffered a number of injuries from what appears to have been from dog fights. (Courtland Wells | The Vicksburg Post)

Keith Pickering was in hell for most of the month of July.

On June 27, his “baby,” JoJo, a 4-year-old white male pit bull who weighed in at 105 pounds, was stolen from near his home off Mount Albans Road.

Pickering had raised JoJo since that late October day four years ago when he was born.

While JoJo lived most of his life as an inside dog, Pickering had no qualms about letting him outside to “do his business.” When it was time for him to come in that day, JoJo was nowhere to be found.

Pickering said he was going out of him mind, wondering where his dog was and what was happening to him. He was determined to find him.

“I wasn’t going to give up on JoJo,” Pickering said.

Turns out, his determination is probably the only thing that saved JoJo’s life.

Pickering launched an almost month-long intensive search. Pickering posted photos on his own Facebook page and another Vicksburg area Facebook page that discusses alleged crimes in Vicksburg and elsewhere. On July 17, he reported his dog missing to the Warren County Sheriff’s Office.

He also made flyers and every night drove all of the back roads near his house calling and searching for JoJo and handing out those flyers, seeking information and offering a reward.

On Friday, after JoJo had been missing almost a month, time spent handing out those flyers paid off when Pickering received a call from a man who told him he knew where he could find his dog.

“The guy I talked to wasn’t interested in the reward and wanted to stay anonymous,” Pickering said. “He told me where I could find JoJo.”

After receiving that call at about 11:30 a.m. Friday, address in hand, Pickering took off on his motorcycle and headed to a trailer park on Cumberland Street.

There, he found JoJo, tied to a telephone pole by electrical cord outside one of the trailer homes.

“I felt rage. That’s what I felt. I was emotional, yes. But mostly I felt rage. How could someone do that to a dog? He had no food, no water. There was nowhere for him to get out of the sun. His nose was already badly burned,” Pickering said. “I was so mad at what they had done to my dog.”

JoJo was a shadow of his former self. He had lost almost 30 pounds and was covered in bite marks and had injuries to his ears and elsewhere on his body.

Pickering said it was obvious JoJo had been used as a bait dog for dog fights.

“My dog has never been in a fight in his life. Now, he won’t even go outside by himself to use the bathroom. He won’t leave my side,” he said. “I can tell you this: I’ll never let him out of my sight again.”

JoJo was happy to see his daddy, too.

“I was on my motorcycle and he knows the sound it makes. By the time I got to him, he was going absolutely crazy,” Pickering said.

When Pickering arrived, he said he parked his motorcycle in the middle of the road and immediately called the sheriff’s office, then called his daughter, telling her to bring her car so they could take JoJo home.

He said when he arrived, about 25 men were out and about in the trailer park. “When they saw me going toward JoJo, they started yelling at me, ‘Is that your dog? Is that your dog?’ However, they scattered when they saw the sheriff deputy drive up,” Pickering said.

He said the deputy didn’t want him to go on the property and get his dog. However, Pickering said he told him he was not leaving without JoJo.

When his daughter arrived, he said he got JoJo and put him in her vehicle and they left.

“They should have sent a detective out immediately to investigate,” Pickering said. “It’s a crying shame that the sheriff’s office knows where I got him, but can’t do anything about it. I want to know who lives in that trailer. I want to know who I can press charges against.”

However, Warren County Sheriff Martin Pace said the sheriff’s office has laws and procedures it must follow when working to recover a pet or any other stolen property or item.

He said his deputies did return to the area and spoke to people in the mobile homes near where JoJo was found.

However, they denied knowing anything about the dog. With JoJo at home, and no evidence to prove otherwise, the sheriff’s deputies can take no further action.