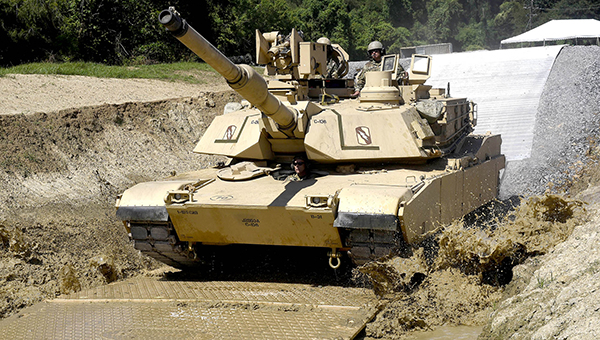 An M1A1 Abrams tank navigates onto a Durabase Matting System, developed by the Engineering Research and Development Center, during a demonstration Tuesday of matting materials vehicles during amphibious operations. (Courtland Wells | The Vicksburg Post)

In a corner of the U.S. Army’s Engineering Research and Development Center is a small area where things tend to get a bit wet.

WETS, the acronym for Water Egress Terrain Surface, is the military term for the many materials used to provide surfaces allowing military vehicles to travel over what normally would be unsuitable for travel.

That corner of the ERDC campus is where the technology to produce those surfaces is tested and evaluated, and the ability of several materials to provide a good surface for travel were demonstrated Tuesday over some of the soils a military unit might encounter in combat or while providing emergency assistance.

The program, said John Rushing, an ERDC research civil engineer, was designed to show how materials would perform in situations involving vehicles moving from water to a riverbank or moving from a landing-type craft to a beach. The test vehicles Tuesday were a 63-ton M-1 Abrams tank, and a heavy cargo truck.

The soils used for the tests simulated conditions involving sand and marshes with low-strength silt and various angled slopes.

“What you often see is the soils that are near water are very weak and hard to traverse,” said. Capt. Daniel Harder, a military research civil engineer at ERDC. And while a lot of tactical vehicles can cross the poor soil, he said, the soil cannot hold up over the constant traffic of vehicles that follow.

“So it’s important to strengthen those soils when you’re doing river crossings or when you’re egressing from ship to shore operations. So that as you’re having thousands of vehicles following behind, they’re still able to cross that soil effectively.”

“We have different materials, aluminum, polymer matts, fiberglass matts; each of them has their different system attributes that are more favorable. The big, stiff heavy ones can carry more load, but they’re harder to move around,” he said.

“The way we do vehicle mobility studies is we put things down and then we drive over them a lot and see what happens,” he said.

“There’s a lot of engineering to that. That’s how we create the design, that’s how we understand the characteristics and are able to answer the questions when the call comes in from Korea and someone says, ‘Can I go across this wet field?’ and we’ll tell them, ‘Take a few measurements and we’ll give you an answer, or we can give you an answer if can if you lay a mat across.’”

The mats are examined to determine how well they respond to the vehicle loads.

“We know there’s many different challenges,” Rushing said. “Every soil does not behave in the same kind of way. Sands are fairly strong soils if we can confine them. So a mat to drive over sand doesn’t have to be as strong, but when we get to weak mud, it does.

“It needs to support a lot of weight itself. The soil’s not supporting the weight; the mat is, or it’s distributing the weight so the soil can support it. Coming out of a riverbed, it’s important that it’s not too slippery. The mat needs to provide traction so we can go up hill if we’re coming up a riverbank, it’s probably wet and probably muddy. Test then under conditions; we put mud on them to test.”

Rushing said ERDC has tested mat designs and construction since 1960, but Harder said ERDC’s history with mats goes further back to the Marston Mat, which was used extensively during World War II.

“I’d say they had to do the same job, but they didn’t have the technology advancements that would allow for that to be done much faster, with lower logistics and more transportable,” Rushing said.

“Probably Vietnam and Korea were the two main drivers,” he said. “We learned the lessons during World War II; the advancements were probably during the 60s, 70s eras. Here we are today testing lots of different composites. We have manufacturing technologies that are enabling us to go 40 percent lighter — that is our target for aircraft.”

“The Waterways Experiment Station has been a world leader in technology development; the goal is make stronger, lighter, and faster to put in. You want it logistically easier to transport and be able handle the weights and the loads of larger vehicles,” Harder said.

Group to get in the ‘Zone’ about living longer