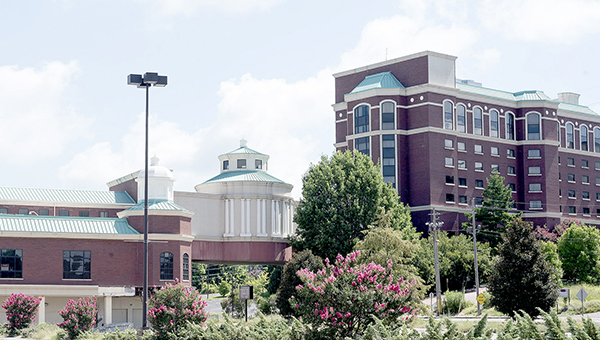 Owners of the former Portofino Hotel say renovation work has started on some of the interior of the facility. The hotel is being changed to a “Margaritaville Resort,” with the announced opening of April 2018. (File Photo)

Work to transform the Portofino Hotel into a Margaritaville resort is continuing, a spokesman for the project’s investors said.

The resort is expected to open in April 2018, but an apparent lack of visible activity at the site has raised concerns about the project’s progress.

“It’s all interior,” said spokesman Greg Stewart, adding the plans and permits for the work going on in the lower end of the hotel area have been submitted to Vicksburg’s community development department. He said plans for the resort’s proposed water playground will be submitted at a later date, but gave no time when they might be delivered to the city.

“We’re in no hurry,” he said of water attraction’s plans. “We’re not looking to open until next spring. We have the plans, it’s just no hurry. We’re working on the lower building first; it’s being renovated. It’s (the site for) the family entertainment section and the restaurant.”

Plans to put the resort at the site of the Grand Station Hotel and Casino were announced in May through a press release from Margaritaville offices in Biloxi.

Cono Caranna, a developer who is affiliated with Margaritaville Biloxi and a partner with Vicksburg Hotel LLC, declined to give the exact cost of the project, except to say it is a “multimillion dollar” investment.

The resort is expected to hire about 250 people and will hold a job fair in early 2018, he said.

Once completed, it will include the nine-story, 117-room hotel with suites and rooms, an indoor arcade, a restaurant and a coffee shop, fitness center and a recreation area called the “Coral Reef Water Playground.”

Caranna said the arcade will offer the latest in video and electronic games and other activities. He said an opening ceremony is planned, but was unable to give a date when that will happen.

The casino vessel was auctioned for scrap metal in April 2013.

Vicksburg Hotel acquired the former Grand Station Hotel and Casino property in 2014, and renamed it Portofino. The hotel closed its doors July 21, 2015, and has not reopened.