Former Vicksburg Fire chief honored for his 33 years of service 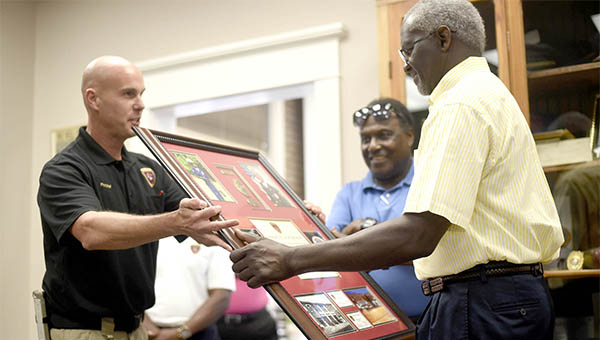 His turnout gear is framed and displayed in the second floor hallway of the Vicksburg Fire Department’s Central Fire Station; a tribute to a man who gave some of the best years of his life to protecting and serving the city’s residents.

Friday afternoon, the Vicksburg Fire Department honored former Fire Chief Charles Atkins, who has officially retired from the department after 33 years, including eight as chief and 15 as the department’s training officer.

Besides his turnout gear being placed on permanent display, Atkins received a framed history of his career, with photographs, his chief’s badge and his firefighter and emergency medical technician patches.

“Chief Atkins has a lot of good memories,” said Fire Chief Craig Danczyk, who was a member of one of the first groups of rookie firefighters Atkins trained. “He worked us hard. He was a man who cared about the fire service, who cared about his city, and he loved Vicksburg. In his 33 years, he left a mark on the department.”

Atkins said the one thing he has tried to do in his career is learn from his mistakes and pass those lessons on to the men he trained and later supervised.

“I tried to correct those mistakes I made and tried to make sure no one repeated them,” he said. “I hope I did that.”

Looking across the room at the firefighters and staff, Atkins told them, “All of you people have been a positive part of my life, and I am proud to know you, and I know I wouldn’t have made it (without you).

“I’m blessed knowing that all of you have been a part of my life. God bless you and God keep you.”

After the reception, Atkins said he has been taking it easy, adding, “I’m not sure what I’m going to do.

“This is a family-type situation, and these people have been a family to me,” he said. “There have been a lot of experiences you can’t forget.”