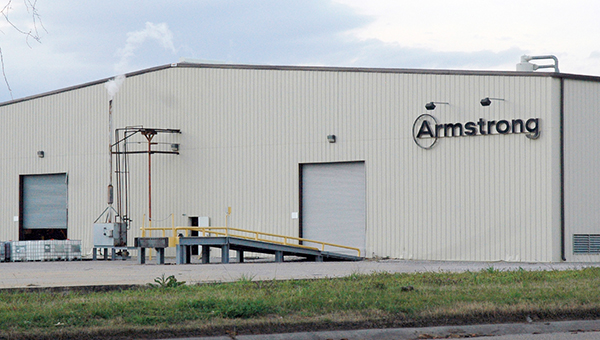 Officials with Armstrong Flooring announced Monday the Vicksburg facility will be closing in October. A total of 93 employees are affected by the company’s decision. (File)

Armstrong Flooring announced to workers at its Vicksburg plant this morning it will close up shop here by early October.

In a press release found on the company’s website, Armstrong officials said it is closing two manufacturing facilities — one in Jackson, Tenn., and its plant in Vicksburg.

The company said productivity gains would allow it to consolidate its manufacturing network while continuing to serve its customers. Armstrong officials wrote in the press release the company expects to save $8 to $10 million annually.

Vicksburg Mayor George Flaggs Jr. said he spoke with an Armstrong human resources official this morning who told him 93 employees here would be out of work. They plan to close the plant in three phases, Flaggs said.

“It’s unfortunate, but it’s a business decision,” Flaggs said. “I offered to help in any way we can through MDA or other tax incentives, but they said the decision was strictly market driven.”

Stephen Trapnell, Armstrong corporate communications manager, said, “This was a difficult but necessary decision, which is designed to better align our manufacturing operations with current customer demand.”

“We are saddened and worried by the impact this closure will have on the local economy and especially on the families of those that will be directly affected,” Diaz said. “This morning, Armstrong Flooring officials informed state and local economic development offices of the changes to come and provided insight into the main reasons for the decision, which included declining sales of their traditional product categories like hardwood flooring.”

Diaz said the focus is now on the employees and economic development efforts to replace the jobs affected.

“The Vicksburg-Warren Chamber of Commerce will coordinate with the MDA and other agencies and will do anything possible to ease this difficult transition for the employees,” Diaz said. “As we go forward, we will be working hard to develop economic development strategies that can helps us quickly recover these losses and create more jobs for Warren County residents.”

The Vicksburg plant produced veneer and plywood that is used to manufacture engineered wood floors at an Armstrong plant in Somerset, Ky.

“Across the industry, the supply of engineered wood flooring and the veneer needed to manufacture it exceeds the demand. Given this excess capacity in the marketplace, it is no longer viable to operate the Vicksburg plant,” Trapnell said. “Closing a plant is one of the most difficult decisions we have to make, because we recognize the impact it will have on the 93 employees whose jobs will end. Our coworkers in Vicksburg have done their jobs well, producing quality flooring that is used by customers across the country. For that, we thank them and will offer them our support as they prepare for their next opportunities.”

Trapnell would not discuss severance packages offered to employees, saying they varied person to person, depending on different roles within the company. He said employees who are willing to relocate are invited to apply for vacant positions at other Armstrong plants.

The Vicksburg plant sits on 64 acres and includes 250,000 square feet of manufacturing space.

Armstrong World Industries purchased the Vicksburg plant in 2006 from Capella Wood Floors, which was started by Anderson-Tully Co in 1995.