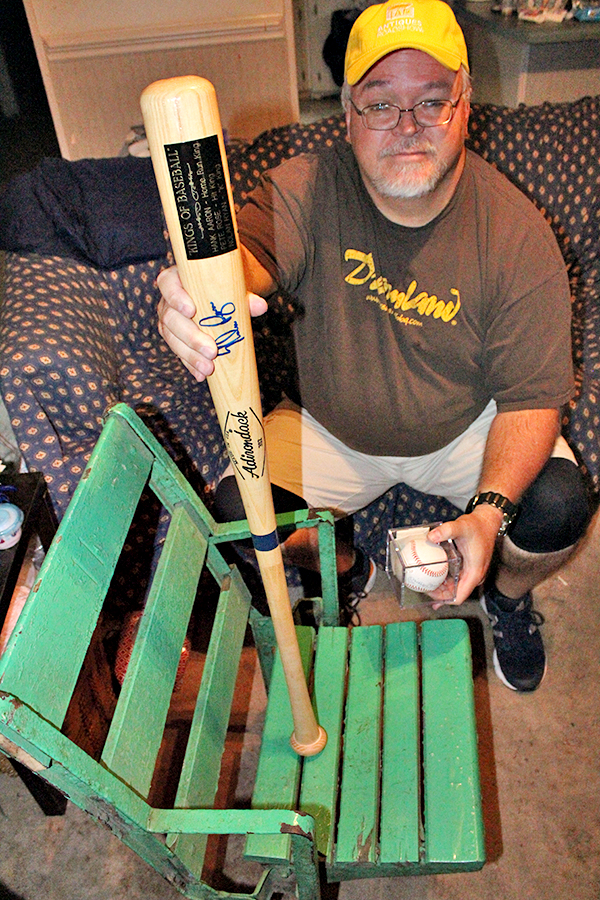 Walter McCallum shows off some of his sports memorabilia — a bat signed by baseball hall of famers Pete Rose, Hank Aaron and Nolan Ryan, a baseball signed by Mickey Mantle, and a stadium seat from old Comiskey Park in Chicago — at his home in Vicksburg. (Ernest Bowker/The Vicksburg Post)

Walter McCallum’s sports memorabilia collection is modest compared to others. There’s a couple dozen autographed baseballs, enclosed in plexiglass cubes and neatly stored on a wall display in a bedroom in his home. A couple dozen golf balls are scattered around the house as well, as are some signed footballs. For this occasion, he pulled one of his crown jewels — a stadium seat from the original Comiskey Park in Chicago — out of storage.

None of the items are worth that much in terms of dollars and cents.

“I don’t have a Honus Wagner card laying around,” he laughed, referring to the ultra rare 1909 baseball card that regularly sells for millions at auction.

Each piece, however, is priceless in its own way in terms of memories. Everything, from the football signed by the 1972 Dolphins to the Mickey Mantle-autographed baseball he bought off of QVC, has a back story and a life experience that is impossible to put a dollar figure on.

“When you talk about people’s hobbies, this is mine,” McCallum said. “Anything with sports, anything activity-wise, I enjoy it.”

McCallum’s hobby started in the late 1980s, during a period when the country’s interest in baseball cards was at a fever pitch. He regularly attended card shows around Vicksburg and Jackson, but his interest in that side of the hobby dwindled a few years later when a number of companies flooded the market with new products.

“I got out of card collecting because there were too many companies,” he said.

Instead of cards, McCallum turned his attention to more one-of-a-kind items. He started getting baseballs and golf balls signed by players and coaches at Mississippi State, or minor leaguers who stopped by Smith-Wills Stadium in Jackson to play for or against the Jackson Mets.

He attended sporting events throughout the region, like the St. Jude and Zurich Classic PGA Tour golf events in Memphis and New Orleans. Eventually, the experience became the draw, as much as whatever acquiring the item was.

McCallum named his son Ryne, after Chicago Cubs second baseman and baseball Hall of Famer Ryne Sandberg. The two Rynes eventually met up at a Mississippi Braves game several years ago, when Sandberg was managing the Cubs’ Double-A affiliate the Tennessee Smokies. Naturally, the younger Ryne was able to snag an autograph.

“The greatest thing was meeting Ryne Sandberg, because I was named after him. That’s pretty cool, to be able to meet the person you’re named after,” said Ryne McCallum, a 16-year-old junior at Warren Central.

Ryne also got a golf ball from Phil Mickelson at the 2006 Zurich Classic. Mickelson made a birdie and handed the ball to Ryne, who was standing along the ropes in the gallery. Ryne downplayed that memory, though.

“I wasn’t really aware of what was going on at the time because I was 6,” he said with a laugh.

Even the more mundane items in Walter McCallum’s collection have a story. He purchased the Mickey Mantle ball off television shopping channel QVC, but was put on the air to talk to the New York Yankees legend for a couple of minutes during the show.

The green stadium seat from Comiskey Park was purchased for a couple of hundred dollars when the ballpark was torn down in the early 1990s. It recently helped McCallum add another story, when he took it — as well as the Mantle ball and a bat signed by Pete Rose, Hank Aaron and Nolan Ryan — to New Orleans in July to get appraised by the crew of “Antiques Road Show.”

The PBS program travels to several cities a year to give people a chance to get items appraised and discuss their history. Tickets to the appraisal sessions are issued through a lottery, and McCallum won two.

All of the people getting their items appraised filmed short interviews afterward, but only a handful will make the cut to appear on the show. McCallum has no idea if he’ll be among them, but didn’t seem to mind one way or the other. Much like his 30 years of collecting, it was more about the journey and the experience.

“Everybody’s going through the line and seeing what everybody else has got, and you see some neat things,” McCallum said. “The only bad thing was they don’t let you bring in any dollies or things to carry stuff with. On the way back it started raining, so I had to carry this (stadium seat) through the rain.”