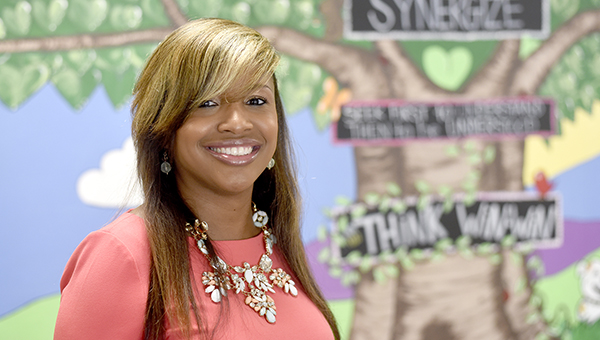 LaToya Minor takes over as the principal at South Park Elementary after spending three years as a principal in the Hollandale School District. (Courtland Wells | The Vicksburg Post)

Three years after leaving, LaToya Minor is back where it all started.

Minor returns to the Vicksburg Warren School District as the new principal at South Park Elementary School, after spending three years in the Hollandale School District.

Minor began her career in the VWSD 10 years ago as a teacher at Vicksburg Intermediate, before taking over as the lead teacher at Grove Street. Three years ago, she made the move to Hollandale as the principal at the lone elementary school.

“I had just got my administrative license and I was in class with the superintendent of the Hollandale School District and heard about the opening,” Minor said. “She didn’t know I was going to apply. I ended up applying, interviewed and got the job.”

Her time in Hollandale was a learning experience, as she led the only elementary school in the district.

“It was interesting,” Minor said of becoming a principal for the first time. “I would not trade it for anything in the world. I learned a lot. Being in a small school district, sometimes when you are the only elementary school in the district and you don’t have anybody to collaborate with, you learn a lot.”

With her children getting older, Minor decided it was time to come home though.

During her time in Hollandale, her children were still attending school in Vicksburg and she was making the commute to work each morning.

“I have two boys who are in the school district,” Minor said. “One that is going to high school and one that is going to fifth grade. Getting up at 4:45 every morning and having to be to work at 7:20. I hated to leave, but it was a decision I had to make for being at home and being there for my children.”

What had been a 55-minute drive every day is now only five with her new job in Vicksburg.

“I just applied for a principal job,” Minor said. “It did not say which school. I found out it was South Park and was thrilled.”

As she takes the reigns of South Park, Minor brings a wealth of experience with her. She helped to implement Leader in Me at her school in Hollandale, and her knowledge of the program and the district, she said, will enable her to hit the ground running this year.

“When I first got to the district in Hollandale, the office referrals were extremely high,” Minor said. “Our first year of implementation, it went down drastically. I got the opportunity to build a lot of relationships.”

Minor said that through Leader in Me, one of the biggest things she learned was the need for collaboration. Not just between the administrators and the teachers, but also between the teachers and the students.

Minor said the plan is to sit down with her staff before the school year begins and create goals for the upcoming school year. As part of that process, her and some of the staff took a trip to the Mississippi Department of Education to look at the raw testing data and see where the school stands.

“At the end of every school year, if you’ve met your goal then you’ve done a great job,” Minor said. “That determines what adjustments you need to make for the next year. One of the things you learn with Leader in Me is you have to collaborate with your staff. I don’t want it to be anything Mrs. Minor says you have to do. We are going to look at our data and just be realistic. What do we need to do to move forward?”

Minor said two of their focuses going forward will be English, Language Arts (ELA) and math, as the staff works to grow each and every students.