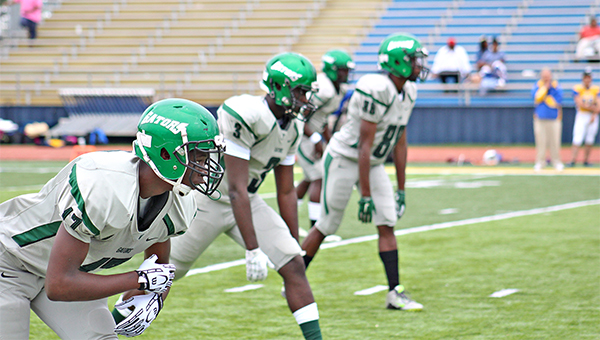 Vicksburg High wide receivers Jhaquiel Porter (17), De’Angelo Dixon and Chris Henderson (88) line up for a play in the spring game against St. Martin in May. The Gators will play Forest Hill and Raymond in a preseason jamboree Friday night at 6 p.m. at Newell Field in Jackson. (Ernest Bowker/The Vicksburg Post)

With 34 seniors and more than a dozen returning starters on the roster, the Vicksburg Gators are experienced enough not to need Friday’s preseason jamboree to figure out how to work together.

It’s more of a test run to fine-tune the entire operation before diving into the first game week of the season.

The Gators will play Forest Hill and Raymond in their jamboree Friday at 6 p.m. at Newell Field in Jackson. Most of the starting positions are set, but coach Lorenzo Breland said it’s a chance for the team to build depth and give some backups valuable experience heading into next week’s season opener against Oxford.

Vicksburg has nine starters returning on defense, and four on offense.

“We’re getting a chance to get some of those second-string guys and the guys that are on the bubble a chance to compete and show if they’ve got it. That’s what we’re going to be looking for, is a lot of competition, hustle and effort,” Breland said. “One half is going to fly by pretty quick, so we’re just taking advantage of those opportunities to get better and compete.”

Among the starters, the goals are simple — make sure everything is crisp and clean, and firing on all cylinders in the limited time available. Each jamboree game is only one quarter, so even though the game doesn’t count in the standings there’s not much time to leave a good impression.

The biggest thing is going to be execution and the game feel, just being able to get out there and get a look and putting our lineup against somebody that’s not our team, and just see how we compete,” Breland said. “The biggest part of the jamboree is getting out injury-free. Hopefully we don’t have that many mistakes to clean up, and then we can put all of our focus back on Oxford.”

The jamboree, and playing on the road in particular, also offers the team another unique opportunity to prepare. By having to travel, it allows the coaches and equipment staff to have a dress rehearsal for upcoming road games.

Small, often overlooked things like radios, uniforms, extra equipment and in-game communications can be fine-tuned this week, before the games count for real.

It’s a facet of the game that is especially important for the Gators. They’ll play three of their first four games on the road, including next week’s opener in the Red Carpet Bowl at Warren Central. Vicksburg plays Oxford at 5:30 p.m. on Aug. 18.

“That all plays a part in it, the whole operation, from the support system to film, to working out the kinks in radios,” Breland said. “It’s a preview for the season to make sure you’ve got everything ironed out that you need. Just that whole game day feel.”