Lady Vikes fall to Germantown, but find positives from competition 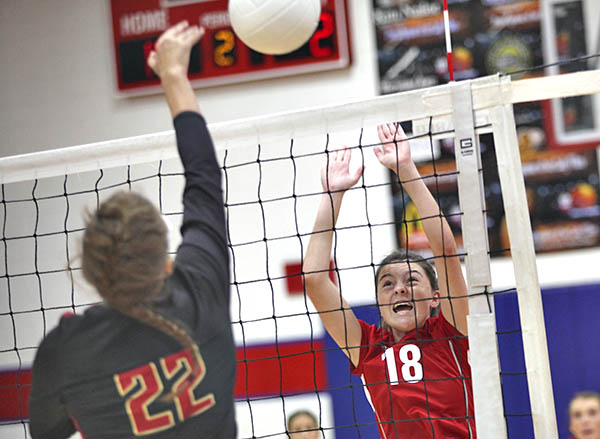 Even in defeat, Warren Central volleyball coach Matt Gullet had reason to smile.

The competitive match, and the effort and skill shown by his players, left Gullet satisfied. He said the atmosphere and tone of the match allowed them to take some positives away from it, even if the result didn’t go their way.

“I was very proud of the girls. Both teams had great crowds and it was an amazing atmosphere,” Gullett said. “We knew it would be a tough match, and both teams played lights out.”

WC got off to a great start, winning the first game 25-7, but the margin the rest of the match was razor thin. The last four games were decided by a total of 12 points.

The Lady Vikes were powered by strong front row play from Sydney Stuart, and the serving of Taylor Smith.

“Our defense was amazing. I had players diving for ball and in front of balls, chasing after mishit balls, and when our offense is clicking we can play with solid programs,” Gullett said. “All around, it was one of the best performances I’ve seen from any squad we’ve fielded. It hurt to take the loss, but I can barely contain how proud I am of the girls.”

The Lady Vikes dropped their record to 1-1 on the season, but will have two chances to get back in the win column Friday. They’ll face Choctaw County at 4 p.m. and Corinth at 6 in the Set It Off Challenge at Mississippi College.

“When I can see how far players have come from the previous year, it is very encouraging for me, them and their teammates. We have to get quality competition in early to see where we are, and that (Germantown) match was a great measuring stick,” Gullett said. “This weekend will allow us to play som more solid competition and get some more players time on the court so that I can see where they are in their development.”