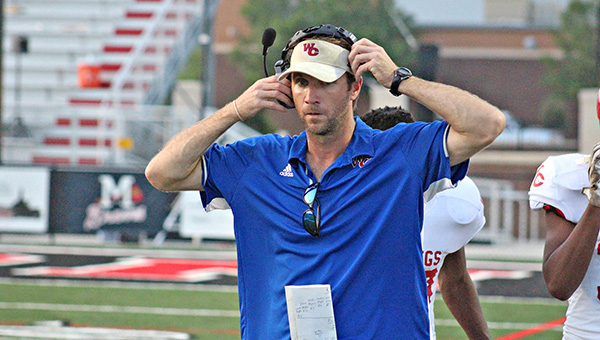 The Vikings have had a good spring and summer and probably could play a real game this week if they had to.
So what is there left to work on in this week’s preseason jamboree?

“The jamboree is important. The main reason is, sometimes there’s so many things that get overlooked and it helps you polish up for the first game that counts,” Morgan said. “We’re still trying to find some answers. We’re still trying to get depth. That’ll be a real big deal for us. The guys you’re thinking about counting on, you get to see live reps with them and then you get to try all of your special teams. It’s good all across the board.”

Warren Central will play Ridgeland in the Madison County Jamboree Friday night at Madison Central. The junior varsity will play two quarters beginning at 7:15 p.m., followed by two quarters of varsity action at 7:45.

Both games will follow regular game rules, including kickoffs and punts in the varsity game. The JV game will not have any kickoffs or punts.

For Warren Central, this is the second look at a roster that was decimated by graduation. Only four starters from last season’s playoff loss to Clinton — defensive back Walt Hopson and defensive lineman Tyrel Smith, tight end Colin Standish and offensive lineman Braden Moody — will be on the field Friday night.

The revamped lineup did well, however, in beating Brandon 34-33 in a spring game that featured both teams’ starting units getting most of the playing time. Morgan said they’ve also embraced their new roles as starters and leaders, which has put the team ahead of schedule going into the season.

“It’s a different role for all of them. I thought we did a good job, starting in the spring, of jumping on that early and letting them know their expectations and what we have for them,” Morgan said. “All of it, to our guys, is very clear. We’ve had guys step up and taking on new roles. Now we to put it in live action, and that can tell us a lot more than in practice reps. We get to be under the lights Friday, and that’ll be a good start.”

Morgan added that he and his assistant coaches will take a similar approach to the spring game in terms of rotating people in and out.

They’ve worked the first- and second-team units together through the summer and through the first two weeks of practice and most of the position battles have been settled for now. Friday will be more about taking closer looks at everyone, as well as giving players enough time to get back to game speed.

“In the spring game, our ones got a lot of the reps just because they needed them. It’ll be a lot like that this jamboree,” Morgan said. “Right now, the more snaps our guys can get the better they’ll be. We’ll try to be very smart with how we disburse reps offensively and defensively, and try to make sure we get our eyes on guys in the right places.”

As for the opponent, Ridgeland, Morgan said it didn’t really matter. He admitted the Vikings have done little to no film study this week to prepare for the brief two-quarter scrimmage. It’s more about executing their own plays and coming back home with a little bit of confidence.

“It’s not too high-strung or strenuous. It’s just a jamboree. But you want to leave there with a lot of momentum as well. You don’t want to go out there and not be prepared and leave a bad taste in your mouth going into Week 1. So it’s a tricky deal how you handle it,” Morgan said. “We’re still working on us and we won’t spend a lot of time on the team we’re playing against. At the same time, at the end of the week they know they get to play somebody else and we get to put what we’ve been working on into live action in a game setting in front of some people. What our guys need right now is that. It’s going to be a big week for us.”

No more what if, it is time to start…