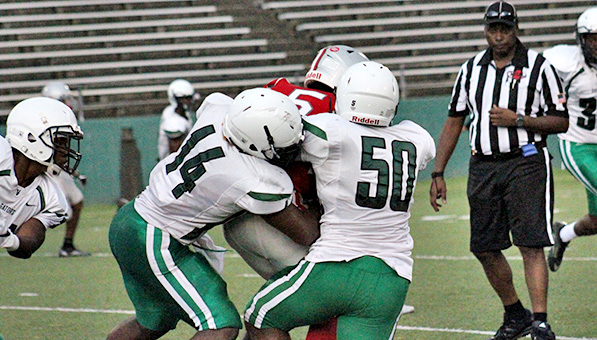 JACKSON — The Vicksburg Gators have eight starters returning on defense this season, some of them heading into their third year in the lineup, and have good reason to feel as if they’re one of the better defenses in Mississippi.

For their first six plays Friday night, however, they looked anything but vaunted.

Provine running back Anthony Davis gashed the Gators for runs of 10, 12 and 19 yards as the Rams moved the ball inside the 10-yard line on the opening drive of a jamboree at Newell Field.

The inauspicious start, however, gave way to a strong finish for the Gators. That initial drive ended with a fumbled snap by the quarterback and was followed by a lockdown performance over the next quarter and a half.

The Gators didn’t allow a first down after that first drive, forced two turnovers and held Provine scoreless in the two-quarter jamboree game. It was an overall solid performance that gave the defense a lift heading into the season opener this Friday against Oxford.

The Gators play at 5:30 p.m. in the opening game of the Red Carpet Bowl at Warren Central. Warren Central plays Clarksdale in the second game at 8 p.m.

“We did a pretty good job. Your first game is not going to be perfect, but I feel like we did a real good job. We’re going to go in on Sunday and see what we need to work on for Oxford,” VHS senior linebacker Nick Anderson said.

Vicksburg and Provine played to a scoreless tie in the jamboree, which was cut short when a lightning delay halted play with 3:02 left in the second quarter. After waiting the required 30 minutes, officials decided to end the game rather than resume so Wingfield and Forest Hill could begin the second game of the multi-team event.

The Gators, though, got enough time on the field to get an idea of what they need to work on and what they can count on this season.

Among the positives was the defense. Gabriel Washington jumped on the fumbled snap that halted Provine’s first drive, and then on the first play of the second quarter Anderson recovered another fumble and returned it 40 yards to the 8-yard line.

Provine receiver Daniel Wilson caught a pass along the sideline, had it stripped, and Anderson was on the spot to collect it.

Provine had one more series before the lightning delay that resulted in a three-and-out. Anderson said a pep talk and adjustments by defensive coordinator Milton Green rallied the unit after its rough start.

“We just weren’t wrapping up and making tackles, and they’ve got a big back. After we got the fumble we gained momentum. Coach Green pulled us to the side and told us, ‘OK, y’all messed up the first drive. Let’s fix it and go out there and make tackles.’ We went out flying around,” Anderson said.

Anderson added that he was pleased with the way his teammates made the necessary adjustments to lock down the Rams for their last two possessions.

“That’s a good sign,” Anderson said. “You hope that every drive will be perfect, but it’s not going to be perfect. So you just have to see what you’re doing wrong and fix it, and get ready for the next drive and make plays. The defense was playing excellent tonight.”

While the defense had a good night, the offense has seen better days.

The Gators got the ball to start the jamboree and converted two third downs before fumbling at the Provine 40. The second drive ended with a punt, and another with a fumble following a completed pass on the first play.

Quarterback Joe Johnson finished the scrimmage 4-for-6 passing for 15 yards, while running back Mike Sims had 12 rushing yards on four carries.

“A lot of it, we’re just shaking a little rust off. Due to the weather and some of the conditions we’ve had, we haven’t been able to get out and do as much team-oriented stuff,” Vicksburg offensive coordinator Brandon Boone said. “With offense, a lot of it is timing. It’s 11 guys working together. It’s no need to panic. I was pleased with what I saw. We made a few mistakes but we bounced back and I saw some good things. We’ve got some new guys in some new positions and they’re just feeling it out, and with time it’s going to come.”

The best chance to score came after Anderson’s fumble return, when the Gators were set up with first-and-goal from the Provine 8. A holding penalty pushed them back, and the drive ended when Johnson was sacked on fourth down from the 25-yard line.

Boone said the mistakes were frustrating, but still has plenty of faith that that the Gators can have an outstanding offense this season. Johnson threw for 3,010 yards and 31 touchdowns last season and is entering his third year as the starter, while the Gators averaged 32.8 points per game in 2016.

The key heading into the regular season, Boone said, was eliminating the unforced errors that plagued the Gators in the jamboree.

“If we play our game and we don’t beat ourselves, nobody can play with us,” Boone said. “You can’t get down to the 3-yard line and have a holding call. You can’t have a big completion on first down and then have a fumble. It’s little things like that, shooting ourselves in the foot that we can’t have. Once we get those things ironed out, Vicksburg High is going to go to the top. We’re not far off. As long as we don’t make mistakes, I think it’s going to be a great season.”