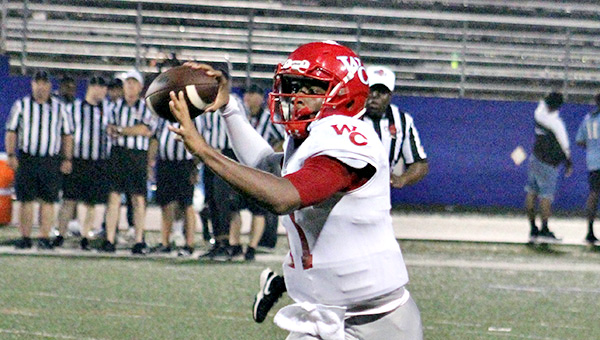 MADISON — As with any preseason game, Warren Central left Friday’s jamboree against Ridgeland with a to-do list of things to work on.

There was the gamble by a defensive back that resulted in a 75-yard touchdown pass. A couple of turnovers killed promising drives on offense. Film study will likely reveal more missed assignments and tiny blunders that doomed a play or two.

On the whole, though, it was hard for head coach Josh Morgan to find too much to be greatly upset about.
The Vikings got three rushing touchdowns from three different players, including a 60-yard run by Corey Wilson Jr., and controlled the flow of the game. Other than the long touchdown pass, the defense held the Titans in check. In the end, it was a 20-7 victory for the Vikings that left them pleased heading into the season-opening Red Carpet Bowl this Friday night against Clarksdale.

“Scrimmages fly by so fast that you feel like you can’t ever get in a rhythm. But, I feel like once we settled down, I liked the way we finished it,” Morgan said. “We saw some good things, and we saw some bad things, and that’s what this was all about. Hopefully we can not make those mistakes next Friday. It’ll be a good starting point for us.”

Jerry Stovall scored on a 3-yard run for Warren Central, and Anfernee Funches had a 5-yard run with less than two minutes remaining to close out the two-quarter scrimmage.

Wilson also had an interception in the final seconds that set up another scoring chance for the Vikings. They got the ball back with 2 seconds left at the Ridgeland 30-yard line, but a pass into the end zone fell incomplete.
“I want to be able to spread it around on offense, and the more that are making the plays the better,” Morgan said. “I thought it was really good for us, because there was a lot to be excited about and there’s also a lot to fix.”

Even the biggest mistake on defense, the long touchdown pass by Ridgeland, made Morgan chuckle a bit. The defensive back gambled and tried to pick off a short hitch pass, but couldn’t haul it in. Ridgeland’s receiver grabbed a deflection and had 75 yards of open field in front of him.

“Our guy went for the pick and tipped it, the other guy caught it and smoked it. You just chalk it up and go to the next play and learn from it,” Morgan said with a grin. “You always tell him don’t stick your hand in the cookie jar unless you can get the cookie. He stuck it in there and didn’t get it.”

After the varsity scrimmage finished, Warren Central’s junior varsity also had a good showing as it beat Ridgeland 14-0 in a game played with a 20-minute running clock.

Shane Lewis threw an 11-yard touchdown pass to P.J. Mims, and Tyrique Willis punched in a 1-yard touchdown run on the final play. Roderick Hughes Jr. ran in a two-point conversion following the first touchdown. No conversion or PAT was attempted after the second.

Morgan said he was happy not only with the way the Vikings played, but how they handled themselves leading up to the game.

“We were successful. We got to play a lot of guys in some big situations. I liked how we competed and how we got ready to play. Those were the two things that we wanted to see,” Morgan said. “We came over here and there’s a team playing and we’re doing our thing, and it’s a little unorthodox, but our kids handled it well. They took the game seriously and they were locked in. That was good to see.”

Brown shines for Flashes in jamboree