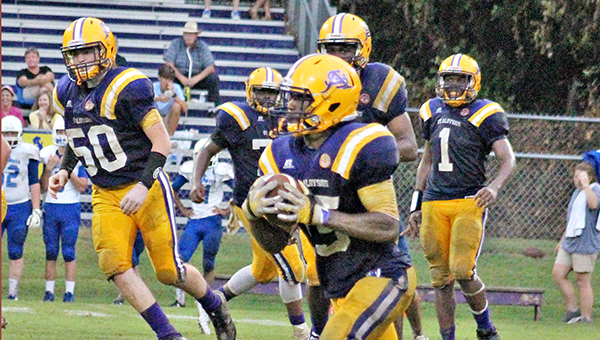 St. Aloysius’ Ketrez Brown runs with the football after catching a pass in a preseason scrimmage. Brown and the Flashes will open the regular season Friday at 7 p.m., at home against Leake Academy. (Ernest Bowker/The Vicksburg Post)

The number of players on St. Aloysius’ roster, currently in the low 20s, will be an issue the team will have to deal with all season. A different number produced by the Flashes will be one for their opponents to worry about.

In four quarters of preseason action — two in a scrimmage against Brookhaven Academy and two more in jamboree games against Claiborne Christian and River Oaks — the Flashes have scored eight touchdowns and 55 points.

Four of the touchdowns have come on plays of 20 yards or more, and they’ve had a few others of similar length that didn’t reach the end zone. It’s an unexpected ability that coach Michael Fields is excited to see continue into this week’s regular-season opener Friday at home against Leake Academy.

“Right now, our offense is proving we have a chance to be a big-play team. That’s important,” Fields said. “With Antonio (Thompson) being a seasoned quarterback, I think we won’t be falling behind early and can make things happen on offense.”

Thompson is entering his second season as St. Al’s starting quarterback. He threw for 1,003 yards and 11 touchdowns last season, and ran for 923 yards and seven touchdowns.

Thompson threw two touchdown passes and ran for a third score in the scrimmage against Brookhaven Academy, but what might have been more encouraging was what the Flashes did in his absence.

When Thompson missed last week’s jamboree with a concussion, Ketrez Brown filled in at quarterback and ran for four touchdowns including a 37- and a 68-yarder. Brown’s performance showed that the Flashes can weather an injury to a key player despite having only 20 players in grades 10-12 on the varsity roster.

It’s also got Fields rethinking his plan for this season. Originally, he had intended to run the ball and bleed the clock to shorten games and keep his team fresh. Now, with the offense scoring points by the bushel, Fields is contemplating scenarios where they might be playing with a lead and scoring quickly.

“Every time you’ve got a team that can go the distance on every play, you’ve got a chance. That keeps you from having to have the ball for 15 plays before you can score,” Fields said. “I’m pretty confident now that we can score in bunches. We just have to get better with our depth and play defense, and that’ll take care of itself.”

Speaking of the defense, St. Al has done well in the preseason there, too. It scored a defensive touchdown in the jamboree game against River Oaks and has only given up one touchdown in four preseason quarters.
Fields said he likes what he sees there, and just hopes the Flashes continue to improve as the season goes along.

“We’re a lot more aggressive than we were in the past, but we’ve still had some breakdowns,” Fields said. “We’re rallying to the football better than in the past couple of years. But you can always get better.”