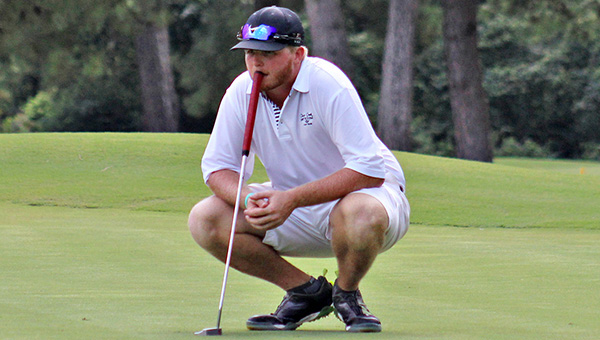 The Warren County Cup has spent the past year secure in the clubhouse at the Vicksburg Country Club, but it might soon head back to its more familiar home at Clear Creek Golf Course.

Clear Creek won three of the seven matches in the morning’s four-ball competition, and then four more in alternate shot in the afternoon to take an 8 ½-5 ½ lead over the Vicksburg Country Club team after day one of the Warren County Cup Saturday at Clear Creek Golf Course.

Fourteen singles matches will be played Sunday that will determine the winner of the Ryder Cup-style competition between Warren County’s two golf clubs. Play begins at 9 a.m.

The VCC squad won the Cup on its home course last summer, 21-7, to break a seven-year winning streak for the Clear Creek team. The teams this year appear to be a lot more even. Besides the relatively thin three-point margin through the first two rounds of play on Saturday, three of the seven four-ball matches were halved.

The ties helped Clear Creek take a 4 ½-2 ½ lead after the morning session, and they extended it with a couple of dominating wins in the afternoon.

All of the Cup matches follow a match play scoring system, where the golfer or team that wins the most holes — as opposed to the cumulative score used in most tournaments — receives a point for their team. The 4-and-3 victory for Curtis and Whittington means they were ahead by four holes with three to play.

Each match Sunday is worth one point. If the score is tied at the end of the competition, the VCC will retain the Cup. Clear Creek needs to win seven of the 14 matches to bring the Cup back to the county’s public course.