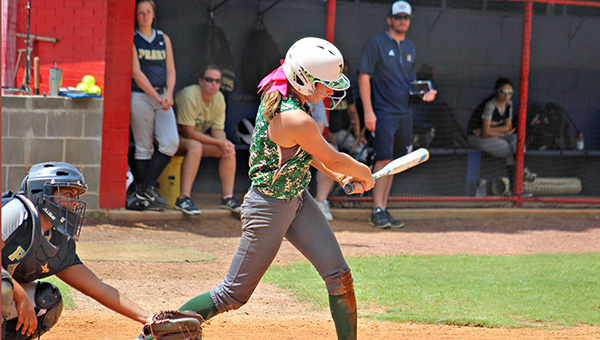 Vicksburg High’s Sara Daniels connects for a base hit during Saturday’s game against Pearl in the WC Slow-pitch Invitational. (Ernest Bowker/The Vicksburg Post)

For two weeks, Warren County’s slow-pitch softball teams have been trapped in a cage.

Hampered by rain and afternoon thunderstorms, the players from Vicksburg High and Warren Central have only been able to practice on the field in short bursts and have instead confined their activities to the batting cage.

On Saturday, they cured their cabin fever by taking out some aggression on Hazlehurst and Pearl.
Vicksburg collected a total of 16 hits and 19 walks in two games, as it beat Hazlehurst 7-4 and Pearl 12-1 in the WC Slow-pitch Invitational at Warren Central’s Lucy Young Field.

Warren Central, meanwhile, smashed Hazlehurst for 12 hits in three innings to win 17-0. In their second game of the day, the Lady Vikes had 14 hits and beat Pearl 9-0.

“It felt good. Especially with all the rain, we haven’t been able to practice as much as we’d like, and when we have been getting on the field we haven’t really performed the way we’d like,” Warren Central coach Dana McGivney said. “So to come out here and play that way, it makes us feel a lot better and makes us feel like it’s maybe we just needed to play instead of practice.”

Vicksburg had gotten to play in its jamboree on Aug. 5, but had its only other scheduled game rained out Tuesday at Raleigh. The Missy Gators delivered two solid all-around performances in their long-awaited debut on Saturday.

Markayla Chiles went 2-for-4 with a double and three RBIs in the 7-4 win over Hazlehurst. Jasmine Miller also had two hits and scored twice.

Against Pearl, the Missy Gators scored five runs in the bottom of the first inning en route to their 12-1 victory. Sha’Nyla Lockridge went 2-for-4 with a double and two runs scored, Abby Hasty drove in three runs and scored two more, and Gracie Emerson was 2-for-4 with two RBIs.

Every player in the starting lineup reached base at least once against Pearl, and eight of the 10 scored a run.

“That last game, our on-base percentage was really high. The second game, we relaxed a lot more and hit the pitches we could hit, hard. That was a good thing,” Vicksburg coach Brian Ellis said. “And our defense as a whole was probably the standout today. We fielded the majority of the chances we had.”

Like Ellis, McGivney walked away pleased with her team’s 2017 debut. The Lady Vikes have had four games rained out, but scored in six of the nine innings they played on Saturday.

Against Hazlehurst, the Lady Vikes had six extra base hits. Kelsey Lockridge went 2-for-3 with a double, triple and two RBIs, and Dee Dee Caldwell was 3-for-3 with a double, home run, four RBIs and three runs scored. Caldwell finished the 17-0 run-rule victory with an inside-the-park grand slam in the bottom of the third inning.

Warren Central then hit four doubles among its 14 hits in the 9-0 win over Pearl. Cocoa Fultz was 3-for-4 with a double, RBI and two runs scored, while Lockridge doubled, singled and drove in two runs.

Kaylee Hoeft also had two hits and two RBIs, and Kaitlyn Mitchell was 2-for-4 with two runs scored. Madison Wade had three hits.

“It’s different. You can hit in the cage all day long, and they do. They kill the ball in the cage. For them to come out here and hit the ball as well as they did, that’s a big step and that’s what we wanted to see,” McGivney said.