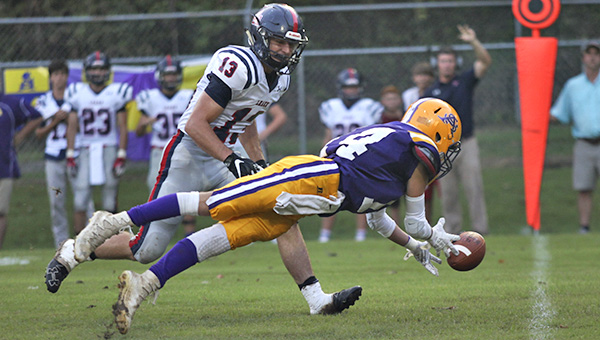 A furious comeback came up just short for St. Aloysius in their season opener Friday against Leake Academy.

The Flashes scored twice in the fourth quarter, but so did Leake Academy as it beat St. Al 21-13 at Balzli Field.

“We never quit,” St. Al coach Michael Fields said. “As long as you’ve got that fighting hard, you have a chance each week. We’re going to continue to work on fundamentals and stay the course.”

After falling behind 14-0 halfway through the fourth quarter, St. Al scored its first touchdown of the game with 3:04 remaining. Quarterback Antonio Thompson heaved the ball from his own 13 and speedy wide receiver Ryan Theriot made a nice over-the-shoulder catch at the Leake 35, then raced into the end zone for the 87-yard score. The PAT failed.

The Rebels answered on their ensuing drive with quarterback Will Lawson Harkins finding Keric Estep over the middle at the St. Al 40. The wideout ran to pay dirt for an 84-yard TD. Cameron Brown added his third PAT of the night to put Leake up 21-6 with 2:18 to play in the game.

The Flashes didn’t give up, however, and backup quarterback Philip Upshaw hit Braxton Chewning with a 5-yard slant pass into the end zone to cap an 80-yard drive. Two key plays on the drive came from Theriot catching a 33-yard halfback pass from Upshaw and Thompson scrambling for a 26-yard gain to set up the score. Connor Smith’s extra point pulled St. Al within 21-13 with 28 seconds left.

But Leake Academy fielded the ensuing kickoff — the Flashes elected to kick it deep, and the returnman fell on the ball after initially muffing it — and was able to run out the clock.

The Rebels held a 7-0 lead through three quarters, scoring on their first drive of the night when quarterback Ryan Atkinson scooted around the line from 5 yards out to cap a 14-play, 62-yard drive.

Leake also had a 20-play drive in the second quarter, but came away with no points as Brown missed on a 25-yard field goal just before the half ended.

St. Al had its first real scoring chance of the night in the third quarter, capitalizing on a pair of costly Leake Academy penalties to move the ball from its own 4-yard line to the Rebels’ 12. But Thompson’s pass into the end zone was picked off by defensive back Gunner Pickens.

Leake went up by two touchdowns with 8 minutes to play when Harkins scrambled for a 47-yard score on a keeper.

On the night, the Rebels ran for 283 yards, with tailback Sam Wilder leading the way with 159 yards on 33 carries.