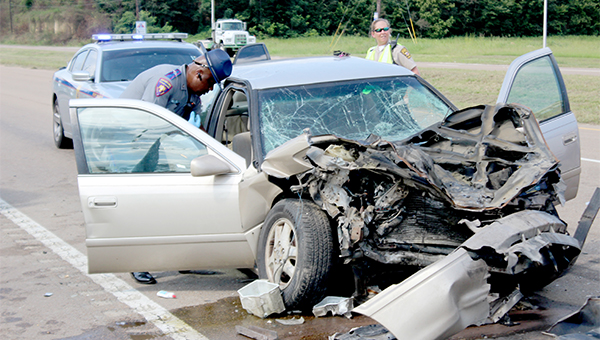 The accident occurred around 3:26 p.m. Tuesday in the southbound lane of 61 N at the intersection with Oak Ridge Road. The Camry, driven by Karri Hutson, rear-ended the semi, which was carrying wooden planks from Anderson Tully.

“I had stopped at the red light and as I was just getting ready to pull off from the red light. I was just sitting there and all of a sudden I just heard this bam,” Carrington Jackson, the driver of the semi, said. “I thought I had lost my trailer. She just ran into me from behind. I basically was stopped. I think I had hit second gear when she hit me.”

Hutson was taken to the hospital by ambulance with what Mississippi Highway Patrol Srgt. John Minor described as “major” injuries. Warren County Sheriff Martin Pace said AirCare met the ambulance at River Region and Hutson was transported to University of Mississippi Medical Center in Jackson.

The four juveniles, ages 8, 8, 7 and 4, who were passengers in the Camry, were also transported to River Region.

Jackson said that after the accident he walked back to see what had happened and saw the kids getting out of the car, but that Hutson “looked like she was in pretty bad shape.”

Jackson was headed to Winnsboro, La., from Anderson Tully with a trailer full of wooden planks at the time of the accident. The truck suffered damage to the rear passenger wheel.

New Sherman Avenue principal has wealth of experience on…