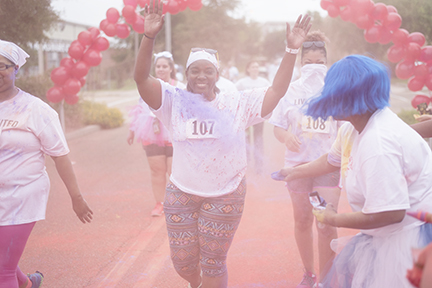 Tiffany Rogers is pelted with powder while passing through the Red Station in the 2016 United Way True Color Run in Downtown Vicksburg on Saturday, Sept. 17, 2016. This year's True Color Run is set for Sept. 23.

The run, which takes place Sept. 23, will have a different starting and ending location than the last two years though. Due to a scheduling conflict, the run will start and end in the BankCorpSouth parking lot on South Street. The race will start at 8 a.m.

Following the race, a block party celebrating the official beginning of the United Way of West Central Mississippi’s annual campaign will be held in the parking lot.

“The after party is going to be bigger and better,” United Way director of marketing Kami May said. “We have two extra cannons, we will have twice the color coming off the stage.”

“Registration is exceeding the expectations I had for it,” May said. “So far we have 70 people registered, which is amazing because last year at this time we only had 20-something. It has improved a lot.

“We learned from the past. The football schedules go out ahead of time and this year we were sure to check the SEC schedule before putting the date in stone. We came up with that date after checking the schedules.”

The run will take participants along a 2.45-mile course through downtown and feature a large color blast at the beginning and multiple color stations along the route. Each of the color stations will blast a different color with each color representing an issue the United Way works to address in the community.

The color blasts are made from colored cornstarch and each participant is provided with a white race t-shirt in their swag bag so the colors show up. Swag bags will be available for pickup starting Monday, Sept. 18, from 9 a.m. to 4 p.m. at the United Way office on South Street.

“That has their t-shirt, their color packet, their bandana, their safety goggles, anything that they need for race day will be in that bag,” May said. “They can pick it up the day of and they can register day of.”

More than 500 people participated in the run last year. All money from the registration fees goes toward the United Way’s annual campaign.