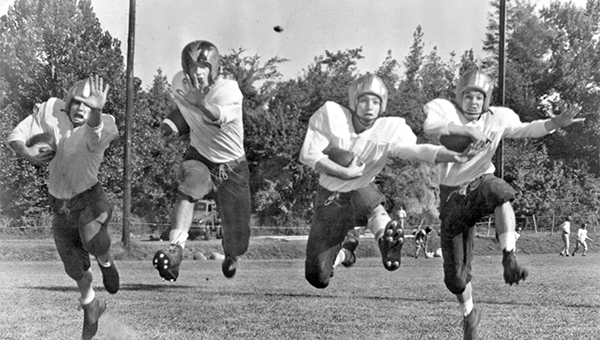 Former St. Aloysius football players, from left, Johnny Marsicano, Warren Doiron, Johnny Hartley and Jimmy Peacock are seen in this photo from 1953. A reunion for former St. Al football players will be held at Farrell Hall in downtown Vicksburg on Sept. 23. (Submitted to The Vicksburg Post)

A couple of years ago, Michael Mahoney was helping his old classmate Delvan Irwin research a book on St. Aloysius football. In the course of contacting former players and students for information, they kept hearing the same suggestion.

“I kept hearing the comment about, ‘Wouldn’t it be great if we could get people together?’” Mahoney said.

Now that the book has been finished, that’s exactly what they’ve done.

Mahoney, his brother Kevin, and Irwin are putting together the “Flashes Legends of the Fall Banquet” on Sept. 23 at Farrell Hall. The event is a reunion for St. Al football players of all eras, and will include speeches by former player Eddie Ray and coach Andy Bourgeois.

Ray starred at St. Al in the mid-1960s before going on to play at LSU and in the NFL. Bourgeois coached St. Al from 1961-63. He was also a member of LSU’s 1958 national championship team and later spent 11 seasons coaching in the NFL as an assistant with the Houston Oilers from 1973-83.

It’s also a relatively private event. Tickets are $45 and proceeds benefit St. Al’s football program, but Mahoney said the banquet is mostly for former players themselves, rather than open to the public. Anyone who has ever been associated with St. Al’s football program is welcome to come, but the idea was to create an environment that plays up the shared bonds across several generations of the program.

Mahoney said the event could be expanded in future years to include families and other alumni.

“We decided it would be a different dynamic if we kept it to just football players. The connections would be different,” said Mahoney, a 1983 St. Al graduate.

Although this is strictly a football reunion, Mahoney said the process that led to pulling it all together has been deeply rewarding.

In 2016, Irwin wrote and self-published a book titled “The Brothers’ Boys: The First 75 Years of Saint Aloysius High School Football 1912-1986,” which chronicled St. Al’s football history. A lot of the legwork in researching the book came in the form of phone calls to track down former players, newspaper clippings, artifacts and other remnants of the past that provided concrete facts to anecdotal stories.

Irwin enlisted Mahoney’s help, and the latter said his eyes were opened to just how deep the program’s history runs. St. Al’s first recorded football game was in 1912, and as a small-town Catholic school has seen a number of generations of the same families suit up in the purple and gold.

“When I was reading through the book, it was like I was reading a family history. I’m 52 years old and it’s the first time I appreciated how rich of a legacy we have. I knew most of the family names and said, ‘That’s such and such’s uncle or grandfather.’ I found out my aunt was a homecoming queen in the 1940s,” Mahoney said. “It gave me an appreciation of the fabric of the community. This was multiple generations of families that have a shared experience with the school.”

And now they’ll all be able to share them all in one room. Mahoney and Irwin are still seeking former players who would like to attend. Online registration is available through Eventbrite.com or by emailing Mahoney at michael@legends.a2hosted.com.

So far, Mahoney said, he’s heard from players ranging from the 1930s through the 2000s who plan to attend the banquet.

“It’s been time consuming and rewarding, because as soon as they understood why I’m calling they open up and share stories like you wouldn’t believe,” Mahoney said. “I thought it would be great to recognize these guys for laying the foundation, build some camaraderie, and use it as a fundraiser for the football program.”

VHS evacuated for bomb threat, all clear given