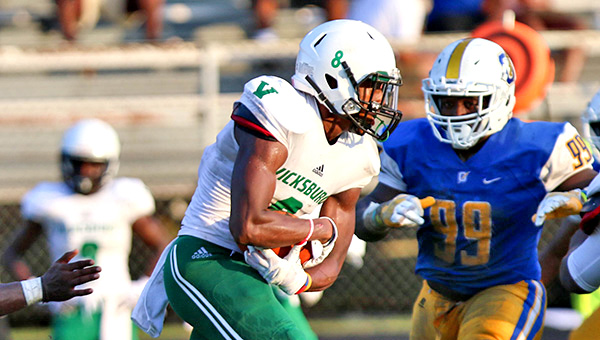 Vicksburg High running back Mike Sims (8) carries the ball last week against Oxford. Sims and the Gators will play Clinton in their home opener Friday at 7 p.m. at Memorial Stadium (Walter Frazier/For The Vicksburg Post)

With a week to dwell on an uneven performance in the Red Carpet Bowl against Oxford, Vicksburg High coach Lorenzo Breland came to a conclusion on the best way to deal with it — just forget it ever happened.

“Getting a chance to come in and watch it and re-evaluate it, the biggest thing is putting it behind you,” Breland said.

Considering what’s in front of the Gators, that’s not a bad idea.

Defending Class 6A champion Clinton comes to Memorial Stadium on Friday, fresh off its own disappointing and mistake-filled loss. The Arrows fumbled three times in the second half of a 24-23 loss to South Panola in their opener and, like the Gators, are looking to clean up the mistakes and get in the win column in Week 2.

“We’re 0-1 and they’re 0-1. Both of us are going to come in fighting and scratching to get that win,” Breland said. “We have a lot to prove. It’ll come down to execution and doing what we have to do.”

In their 21-6 loss to Oxford last week, the Gators only managed to gain 116 yards on offense. They also had 16 penalties for 107 yards, dropped a punt snap that led to an Oxford touchdown, and missed a chance to kick a tying PAT in the first half because of three consecutive false starts. Eight of the 16 penalties came before the snap, on false starts or offsides calls.

The bright spot was the defense, which forced two turnovers — including an interception return for a touchdown by Jamaal Jefferson — and kept the game close until the final minutes. Oxford didn’t score the clinching touchdown until 2:06 remained in the fourth quarter.

A strong defensive effort will be important against a Clinton squad that put up 409 yards of offense against South Panola, but also lost three fumbles. Getting some more turnovers, and turning them into points, would be a key this week, Breland said.

“They played their first game, too,” Breland said. “You see the stats, but a lot of times those stats are flawed. We’re definitely going to try to get turnovers, and turnovers for touchdowns.”

The idea of flawed stats could extend to the Gators as well. For all of their struggles on offense last week, they did get into Oxford territory on all five of their possessions in the second half. Penalties and turnovers, including an interception in the end zone, thwarted their efforts, but those are self-inflicted wounds Breland said could be cleaned up.

“It’s going to be Vicksburg vs. Vicksburg. If we can get out there and execute, we’re going to be OK,” Breland said.

The most important thing, Breland added, was not to panic. The Gators won nine games last season with many of the same players, and the offense averaged more than 30 points per game. He didn’t believe they’d taken a step back, but rather just had a bad game.

“It is one of those things you do look at. You get to racing a million miles per hour, and it’s one of the tough things about coaching — is it what we’re doing in general, or the things we’re doing at that moment,” Breland said. “It’s definitely not a panic at all. We just have to slow it down and focus on what we do well. We’re definitely not in panic mode. We just have to execute.”