Bulldogs beat up on Bulldogs 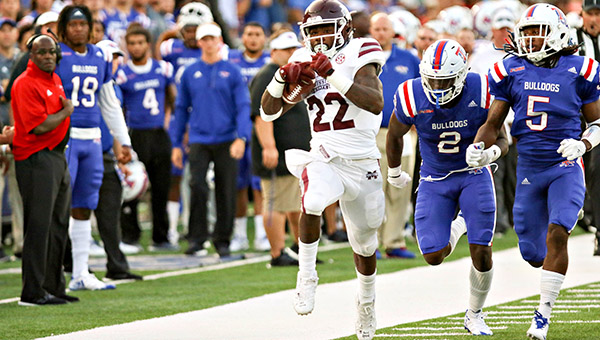 RUSTON, La. — Mississippi State showed that it’s not how you start, it’s how you finish.

And boy, did they finish.

The visiting Bulldogs scored 36 straight points after falling behind by two scores early, and routed Louisiana Tech 57-21 on Saturday night.

Mississippi State (2-0) recovered a blocked punt in the end zone for a touchdown, and got another on defense when Jeffery Simmons returned a fumble 90 yards. Simmons also blocked the punt that led to the special teams TD that tied the game at 9.

Nick Fitzgerald completed just one of his first five passes as Mississippi State fell behind 9-0 in the first quarter. He finished the game 12-of-18 for 124 yards and three touchdowns, and also ran for 111 yards and two scores.

Aeris Williams added 107 yards on the ground, and freshman Kylin Hill had 62 yards and a touchdown.
Fitzgerald’s 17-yard TD pass to Jordan Thomas with a minute left in the first quarter put them ahead of the homestanding Bulldogs for good, 16-9.

Fitzgerald threw two more touchdown passes in the second quarter and ran 30 yards for a third to put Mississippi State ahead 36-9 with 45 seconds left in the first half.

Louisiana Tech broke the run with a defensive two-point conversion and added a field goal before halftime to make it 36-14.