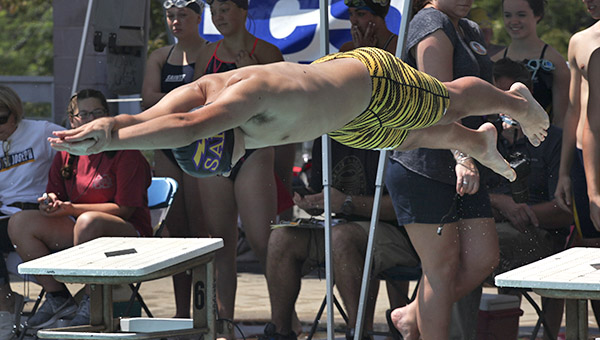 In one of the biggest meets of the season and one of its final tune-ups before the Mississippi Association of Independent Schools state meet, St. Aloysius more than held its own on Saturday.

Tommy Martin won the 100-yard breaststroke, was part of the winning 200-yard freestyle relay, and was also on a pair of second-place relays to lead the Flashes to a third-place finish at their St. Al Invite at City Pool.

St. Al totaled 76 points, just missing out on a share of the meet championship. St. Andrew’s and Madison-St. Joe tied for the boys’ title with 77 points apiece. Oak Grove was fourth with 69 points in a meet decided on the final event.

Eleven boys’ teams and 11 girls’ teams competed in the meet, which included more than 300 swimmers in all.
Martin teamed up with Connor Clark, Adam Eckstein and Jacob Waisner to win the 200-yard freestyle relay, and the same group finished second in the 400 freestyle relay.

Eckstein, Martin, Waisner and Andrew Ulmer finished second in the 200-yard medley relay, and St. Al had a handful of standout individual performances as well.

Eckstein finished third in the 100-yard backstroke, just ahead of his teammate Clark. Eckstein posted a time of 1 minute, 2.56 seconds, while Clark hit the wall in 1:04.16.

Clark also managed a third-place finish in the 50 freestyle, with a time of 25.30 seconds.
Teammates Gibson LaMastus and Trace Steadman of Cleveland Central High School were first and second in the 50, in 24.69 and 251.4 seconds, respectively.

In the girls’ meet, St. Al totaled 52 points to finish in fifth place in the team standings. Warren Central was seventh, with 24 points.

Warren Central’s best individual performance came from Abi Wallace, who placed third in the 100-yard backstroke to lead a Warren County parade in the event.

Finishing right behind Wallace were St. Al’s Adrienne Eckstein and Leah Larson. Wallace finished five-hundredths of a second ahead of Eckstein in 1:14.69, and Larson was two seconds behind them.

Larson, Eckstein, Ann Elizabeth Farthing and Emily Cook teamed up for a fourth-place finish in the 200 freestyle relay.

Farthing also collected a fourth-place individual finish in the 100-yard breaststroke, with a time of 1:18.31.
St. Al will now begin the run-up to the MAIS Overall State Meet on Sept. 20 in Jackson. The Flashes finished second in 2015 and third last year, and are looking to finally break through for a state championship.

USM runs right past Southern U.