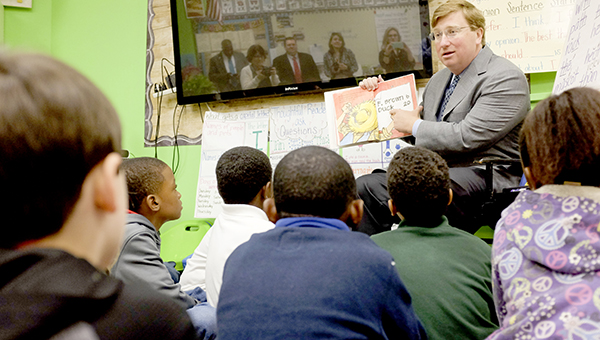 Funding for Mississippi’s public schools needs to be based on a formula that can best help the students, Lt. Gov. Tate Reeves said Wednesday.

He said, however, the topic of the best way to fund education in the state is still being discussed by the administration and the Legislature.

“We think we ought to have a student-centered formula that focuses on what’s best for kids,” he said. “We’ve had many conversations over the last years, we’ve hired a consultant to take a look at it, to make recommendations, we’ve had conversations with the leaders in the House and the Senate, as to what that new formula may look like.

“I think it will be a topic over the next few months to work with school superintendents to see if there is something we can come up with that really makes sense.”

Reeves comments came as he toured Dana Road Elementary and read to second-graders, met with community leaders and spoke at the Vicksburg-Warren County Chamber of Commerce’s monthly luncheon meeting.

He said visiting schools is something he tries to do during visits to communities.

“It’s something I really enjoy doing because it gives me a great optimism for the teacher to see how interested and intrigued these children are in the learning process, and of course this is a school district that is on the rise and is doing well and has great leadership, and you can just see the excitement in the teachers eyes and it’s fun for me to see.”

While discussing school funding, Reeves would not say where the state would get the money to improve funding for education, or whether some of the recent tax breaks approved by the Legislature would be repealed.

He said the state would spend more than $4 billion on education in grades K-12 this year, which was spending $400 million more than the year he was first elected lieutenant governor despite the drop in state revenues.

He also said state officials are working to improve the amount of resources going into the classroom, work to improve efficiency in school district operations.

He said, however, the move has resulted in improved scores in fourth-grade reading and math and graduation rates.

Addressing the Vicksburg Warren School District’s success, “I’m convinced the school districts that are well make decisions on what is best for kids, whether it’s best for the adults or not,” he said.

“You go into a school district where you’re seeing them struggle, the leaders are making decisions based on what’s best for the adults, rather than best for the kids.”

That was one reason, he said, a state law was passed eliminating elected school superintendents, because they were inclined to do things based on the ability to get re-elected, rather than what was best for the child.

“There are 5,000 things we can discuss, but at the end of the day, it all comes down to is the leadership making decisions based on what’s best for kids, whether its best for the adults or not.”