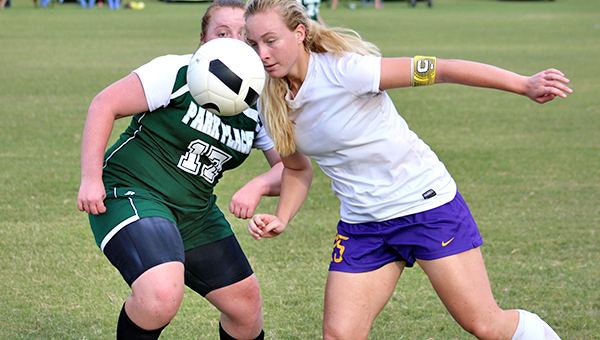 Bailey Steen scored one goal and assisted on two others as Park Place Christian beat the Lady Flashes 3-0 in a key District 3-AAA match at Strickland Field in Bovina.

With the win, Park Place (8-0-1, 5-0 District 3-AAA) moved into the driver’s seat for the district title and homefield advantage for most if not all of the MAIS Class AAA girls’ soccer playoffs.

Park Place and St. Al (4-2, 4-1) will meet again Wednesday in Pearl, but St. Al needs to win by at least three goals to have a shot at the No. 1 seed. St. Al is still in good shape for the second playoff berth from the district, however.

“If we get everybody back, we can hang with anybody,” St. Al coach Scott Mathis said. “When you’ve got a young defense and they get down, it tends to fall apart. The second half we played better, especially toward the end. The defense pulled together.”

The offense never did, however.

After scoring 22 goals in its previous three games, the Lady Flashes were held to only four shots on Thursday.
Mathis said part of that slump was caused by having two starters go out with injuries early in the game, and another who had to sit after receiving a red card in a 3-0 win over Central Hinds on Wednesday. That forced Mathis to shuffle the lineup and play some people out of position and others in extended roles they’re not used to.

“I had to put new people in the midfield positions that had never played before,” Mathis. “They were trying to do the team thing, and that’s OK.”

Steen broke a scoreless tie in the 39th minute, and then had assists on goals in the second half by Sybil Roberson in the 45th minute and Maggie Savell in the 52nd.

Park Place also missed two other scoring chances, when Roberson was stopped by Mathis on a penalty kick in the 39th minute and Savell hit the crossbar with a shot in the 48th minute.

District title hopes, bragging rights on the line for St. Al and PCA

There’s a buzz in the air around Vicksburg this week, as its two private schools St. Aloysius and Porter’s Chapel... read more