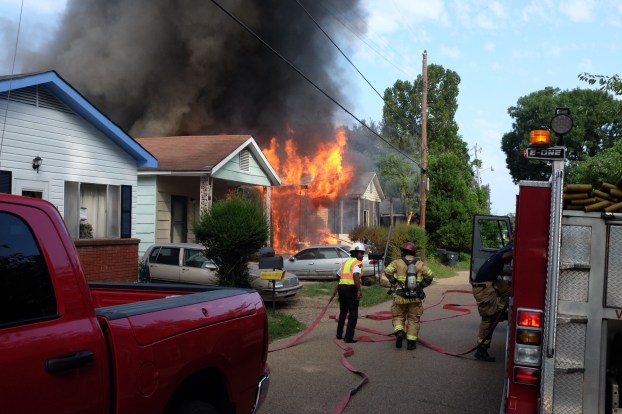 One death is confirmed, the result of a house fire this morning on Marcus Street. (Courtland Wells/The Vicksburg Post)

A wheelchair-bound woman was killed in her Marcus Street home after it became engulfed in flames Tuesday morning.

She was declared dead by Warren County Coroner Doug Huskey. He said the body was severely burned and declined to identify the woman pending the result of DNA tests. He said her body was sent to the Mississippi State Crime Lab for an autopsy and tests.

Fire Chief Craig Danczyk said an investigation by city and county fire investigators and the state Fire Marshal’s office indicated the fire began in the living room of the house and is believed to have been caused by an electrical malfunction.

“There were several electrical items plugged into the socket,” he said. Danczyk said the woman was found in a doorway between the living room and a bedroom.

“We are sorry for the loss, and our thoughts and prayers go out to the family.”

“When I arrived at the scene, flames were rolling out of the front and the sides of the building,” Danczyk said. “We had to fight heavy flame and smoke.”

The wood frame house sits among a row of small shotgun houses on the south end of Marcus Street off Wisconsin Avenue. It had a wheelchair ramp off the front porch, and a metal roof.

Dancyzk said the metal roof may have affected the spread of the fire through the house, and at one point firefighters had flames coming from under the roof.

He said flames from the fire caused heat damage to homes on either side of the house, melting the electrical meters. He said the heat melted the city gas meter dial at the house on the right side of the fire. The heat also caused a small fire on the house, which was extinguished. He said the house was later checked to determine if there were any hot spots, but none were found.

The flames also burned nearby power lines, causing them to pop and shower sparks on firefighters.

“I congratulated my firefighters,” Danczyk said. “They did a very good job considering the circumstances. This was a difficult fire. The power lines prevented us for using our ladder truck, but we were able to get access and get the fire out.”

The streets around the Old Court House Museum will be full of vendors and shoppers Oct. 7 for the museum’s... read more