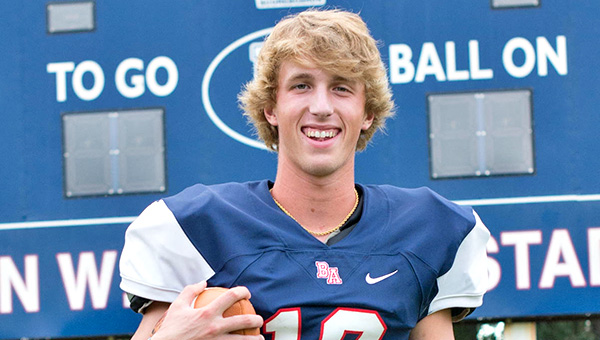 Briarfield Academy quarterback Holt Martin accounted for 435 yards and eight touchdowns in a 58-18 win over Tallulah Academy on Friday night.

Briarfield Academy might have served notice Friday night that there’s a new power rising in the MAIS eight-man football division.

Martin accounted for 435 of Briarfield’s 440 yards of total offense. Four of his touchdown passes went to Daniel Frasier, who caught six passes for 159 yards. Grayson Parker had the other touchdown reception for the Rebels, who led 34-6 at halftime.

Parker Kivett completed 9 of 11 passes for 150 yards and two touchdowns for Tallulah Academy, and Joshua Collins rushed for 136 yards and a TD.

Tallulah (3-3, 0-2 District E-2) lost its third consecutive game and is in danger of missing the playoffs for the first time since joining the eight-man division in 2014.

Briarfield (4-1, 2-0), meanwhile, kept pace with Riverdale (4-1, 3-0) in the District 2-E championship race by winning its second district game in a row. Briarfield’s last five games are all within the district.

Porter’s Chapel Academy propped up its playoff hopes and got a needed boost of confidence Friday night, by going on... read more