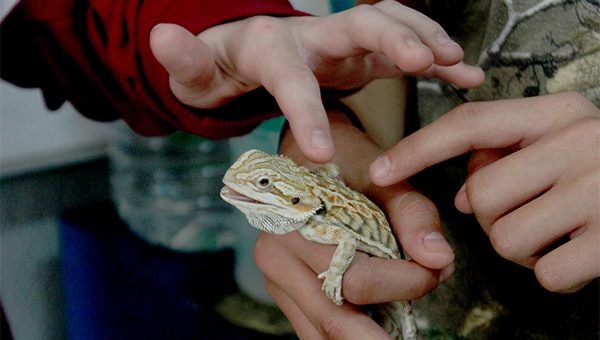 PCA students have pet dragon to help with lessons

Mike King’s fifth and sixth grades classes at Porter’s Chapel Academy have a unique visitor this school year to help with lessons in math, science and history.

Nestled behind the door in an aquarium, a juvenile bearded dragon has taken up residence as the classroom project for the school year.

“He is originally from Australia,” King said. “He was probably four or five inches long and about a half inch wide. You can see how much he’s grown. He’s almost 30 centimeters now. He has tripled his size in the last month.

“Some of them (the students) have never had any kind of pet and I think we only have two students that don’t want to hold him. We take him out about once a week and pass him around the classroom. One of the ones that didn’t want to hold him to begin with now won’t keep her hands off him.”

The lizard is currently kindly referred to as It, because they are waiting to give it a name until they have determined its gender.

“We don’t know if it is a male or female yet,” King said. “The veterinarian said we wouldn’t know until he was almost grown and at that point we want to name it. We are going to do a language writing contest and whoever writes the best paragraph gets to name him.”

The plan throughout the school year is to prepare lessons in science, math and history around the lizard. King said his classroom is divided into rows and each week a different row in his sixth grade class is in charge of measuring the lizard.

“Sixth grade is using it for math,” King said. “We are doing a line plot with him and actually when he gets a little bigger we will weigh him. We will use grams and metric to weigh him.”

A group of students in the afterschool program is charged with feeding the lizard and making sure it is handled so it grows used to people.

“It is interesting to see it grow and to handle it every day and learn to feed it,” fifth grader Marley Bufkin said. “We are trying to teach it a trick and we are going to walk it.”

She said they are hoping to teach the lizard to walk into their hand when they tap their palm and say come, but they “aren’t having any success with it so far.”

In the first few weeks of school the lizard has molted twice as it continues to grow and it should be about 18 inches long when fully grown.

When it reaches that point, King said it will start eating mealworms and the turf in its aquarium will be changed out for sand. They also hope walk it on a leash so it can be shown to students in other classes.

“His diet consists of mainly crickets right now. Eighty percent of it is crickets. He will eat vegetables such as turnip greens, asparagus and carrots. He loves carrots,” King said. “Doesn’t drink much water, but we spray it about once a day with a misting bottle. I clean the aquarium every Sunday afternoon. It is no trouble at all and has been a real good project for the kids.”

King has done similar projects in the past with Quaker Parrots and even a tarantula and said he chose a bearded dragon this school year after about a month of research over the summer.

At the end of the school year, King said one of the students will likely have a new pet to take home for good and the lizard should have a lifespan of six to eight years.

Community Night set for Tuesday at the Heritage Demonstration Garden