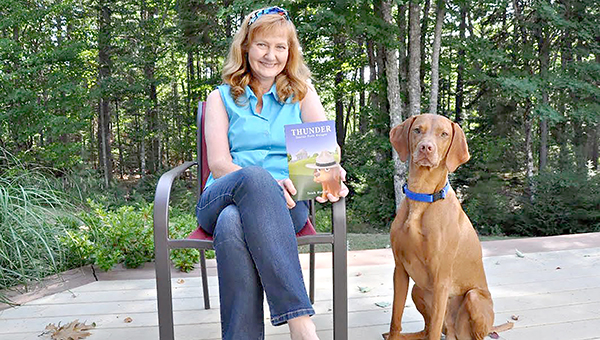 Trish Madell poses with her dog, Thunder, who was the inspiration for the hero in her new children’s book. (DICK BROOM/ISLANDER PHOTO)

The Vicksburg Post
An adopted puppy’s adventures in the Vicksburg National Military Park are now the subject of a children’s book.

Written by Trish Madell, a former Vicksburg resident, the book entails the story of a curious puppy named Thunder who takes a daily walk in the Vicksburg National Military Park.

“When my husband and I lived in Vicksburg, we adopted a puppy and I walked the puppy in the park every day and noticed how he interacted with the park. He would point at the butterflies, sniff everything. He even got sprayed by a skunk several times and got bit by a copperhead snake,” Madell said. “As I watched Thunder interact with the park, I thought, ‘This puppy leads a very interesting life.’

“I made a Christmas card with a picture of him in the park and thought, ‘This card needs a story.’ So, I started it back then and finished it just recently.”

The story of the book takes place during the record-setting Mississippi River flood of 2011. It includes life lessons and encourages readers to be kind while also paying attention to their surroundings. It tells how Thunder makes friends and helps them during his daily adventures through the park.

“It’s all about friendship and leadership. All of the characters interact with each other in a helpful way and I want to show that things go better when you work together,” she said.

Along with teaching life lessons, Madell said she hopes to reach elementary school age children who are reluctant to read and encourage them to get excited about reading.

Based on a true story, Madell said she hopes to reach out to the community and show how helpful the park is now even though it is historic.

“I hope that everyone will see it as a positive message and that people will see the park is still relevant and serves the community today,” Madell said.

The Madells spent five years as Vicksburg residents when her husband, Mike Madell, was superintendent of the Vicksburg National Military Park.

The family, which includes Thunder and their cat, Spot, now live in Bar Harbor, Maine, where Mike Madell is deputy superintendent of the Acadia National Park. Madell said she still reminisces on the time spent at the Vicksburg National Military Park.

Madell will be in Vicksburg for the book release to sign the children’s chapter book.

“I am totally excited! I love the park so much,” she said. “I think the book is a great tribute to the park.”

An almost 20-hour search for a 76-year-old man who was reported missing Monday had a happy ending Tuesday morning when... read more