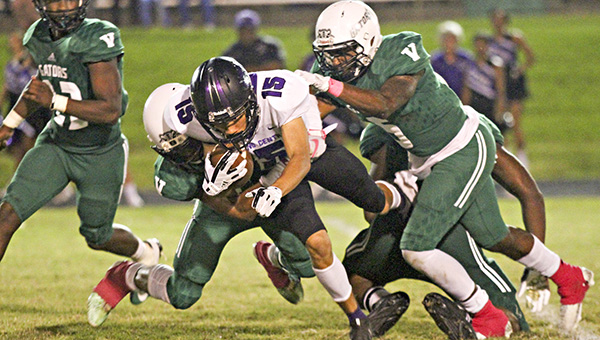 Vicksburg High’s Gabriel Washington (5) and a teammate tackle Cleveland Central's Luke Gerzon. The Gators lost 21-14, but are still in the thick of the Region 2-5A playoff race.(Courtland Wells/The Vicksburg Post)

The 21-14 final score might not have been in their favor, but Friday’s game against Cleveland Central could have been just the spark the Vicksburg Gators needed to turn around a season that looked destitute as recently as two weeks ago.

Coming off their first win of the season over Neshoba Central, the Gators hosted undefeated Cleveland Central in a game that had all the makings — on paper, at least — of another blowout loss.

VHS lost its first five games of the season by a combined score of 151-33 as its struggled to move the ball and continuously wore out in the second half. The 23-0 win over Neshoba was the first time it had scored in double digits.

Cleveland, on the other hand, was averaging nearly 32 points per game 6-foot-9 quarterback Kamarian Williams had amassed 1,540 passing yards and 15 touchdowns through seven games.

The Gators came out battling from the first whistle and, despite 208 passing yards from Williams in the first half, trailed by only a point at halftime thanks to a 66-yard fumble return for a touchdown by Rasheed Knight. It was the third touchdown Vicksburg has scored this season on defense or special teams.

“That is one of the things we told them. Not only do we just need to get a turnover, we always preach turnovers and we’ve been getting those consistently, but we talked about getting a turnover and actually creating a score and playing with momentum and that is what we did,” VHS coach Lorenzo Breland said.

The offense marched down the field on the opening possession of the second half and took the lead on a 4-yard touchdown run by quarterback Joe Johnson.

The Gator defense forced fumbles on each of the Wolves’ first two plays of the third quarter. Both were recovered by Nick Anderson.

The offense failed to capitalize on either turnover and was held in check for the remainder of the game as the Wolves came back for a 21-14 victory.

Despite the loss, the game will serve as a building block for the Gators as they look to find their identity the rest of the way.

“Like I told the kids, this is a game that shows us we can play with anybody,” Breland said. “When they’re coming undefeated and we’re down by one at the half and it is a tough ballgame for four quarters, what more can you expect? Any time kids give effort and the game is close in the fourth quarter with a chance to win that is the best situation you can be in.”

The Gators have four games left in the regular season, starting with homecoming this week against Ridgeland (3-4, 1-2 Region 2-5A).

Vicksburg (1-6, 1-2) and Ridgeland are two of six teams in a tie for third place in Region 2-5A, meaning there’s still a lot to play for despite everything that went wrong in the first five weeks of the season.

“We’ve just got to keep building our offense up,” Anderson said. “We’ve got a young offensive line and we’ve got young receivers. Compared to the beginning of the season, I say we had a heck of a game offensively. We’ve just got to fix the small things, penalties and the missed catches. I am proud of my offense.”

Anderson was one of the most animated players on the Gator sideline throughout the game, constantly pumping up his teammates as they showed an improved demeanor throughout the night.

Work on the Yazoo & Mississippi Valley Railroad Depot will be done by a Jackson contractor, pending approval by the... read more