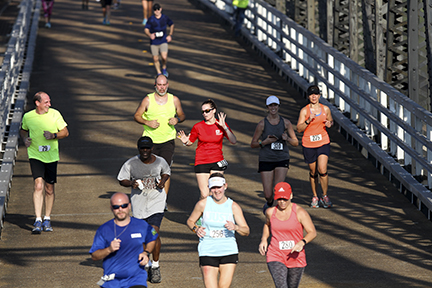 Runners and walkers cross over the Old Vicksburg Bridge during Saturday’s annual Run Over the River. (Courtland Wells/The Vicksburg Post)

Runners, walkers do it for the health benefits

More than 350 people from all over came to Vicksburg Saturday to participate in the 29th Annual Run Over the River to run or walk across the Old Vicksburg Bridge.

The event included seasoned runners and walkers, as well as newer runners and walkers. But it was much more than who finished first. In fact, there were a variety of ages, and running backgrounds amongst the individuals who participated.

Of the older racers some were 70 and younger racers were as young as 5. A few runners were new to the city, as well as to the run.

“I’ve been in Vicksburg for two years with the Corps in the Vicksburg District and our district has a group that runs and so that’s a little bit of camaraderie; a little bit of enjoyment here crossing the bridge and just a great community feeling with the Over the River Run,” said Michael Derosier, a first-year runner.

Other runners were new but had been coming to the race for a few years.

“I’ve been running for four years and this is my second time in the race,” said Chris Alexander.

“The after party and the beer truck,” Alexander answered when asked what brought her back to the run.

The terrain was another interesting part of the run as well. Running across the historic Old Vicksburg Bridge was something that many runners cherished.

“It’s rough coming up. They’ve changed it some since I first started. It’s further up the hill than when I first started, but I still enjoy it,” said Sue Greer, 20-year Run Over the River runner.

“I got sick a few years back and had to quit and I just started back again. I love that I get to see all of my friends that I race with.”

Runners and walkers reported that the most difficult part of the terrain was the hill towards the end of the race.

“The terrain was great, it’s real smooth, but that hill at the end was terrible,” said Alexander.

Among the walkers were the Shape Up Vicksburg Organization and the Get Healthy Walking Club.

“We have been a part of Walking Across the River for about 6 or 7 years now,” Linda Fondren, Shape Up Vicksburg spokesperson, said. “What we do is join other walking clubs so that sometimes people who may not be able to afford to walk in the races can walk with the walking club and they’re able to get out and get some fresh air and get healthy in the process.”

The importance of making Vicksburg Healthy is a focus point for Shape Up Vicksburg.

“The race affects the community in a very positive and powerful way. What we do when we get people outside is truly electrifying because people are coming together and we are working on our health issues together and we’re doing that socially,” said Fondren.

For more than 35 years the Haven House has served as a sanctuary for women and their children who are... read more