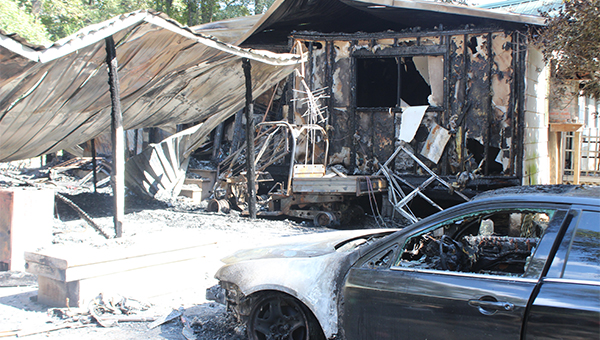 Units from every Warren County fire department responded to a fully involved structure fire at a home located at 60 Barber Drive Saturday evening.

Tim Bordelon, the assistant chief of the Bovina Fire Department, said units responded to the call at 7:41 p.m. and were at the scene until midnight fighting the fire.

No one was home at the time, but two dogs were killed in the fire.

“It started on either the outside structure or something on that sidewall where the extension was,” Bordelon said.

“The fire didn’t actually get them (the dogs) I think. It was mostly smoke.”

Bordelon said by the time units arrived on scene, large portions of the house and exterior shed were on fire, but they were able to save about 75-percent of the house by attacking the flames from the inside and the outside of the house, he said.

“The outside shed and extension off the house and the sidewall of the house was on fire,” Bordelon said of the state of the fire when units arrived on scene. “We made an assault into the house, cut the fire off and pushed it back out through the burned part. We were actually able to save a good majority of the house. We entered the house and attacked it inside through the attic.”

The cause of the fire has not been determined, but the fire investigator was on scene Saturday evening, Bordelon said.

SCHF gearing up for Kids in the Kitchen this month

Halloween eats and spooky treats are what the menu calls for during the Southern Cultural Heritage Foundation’s two sessions of... read more